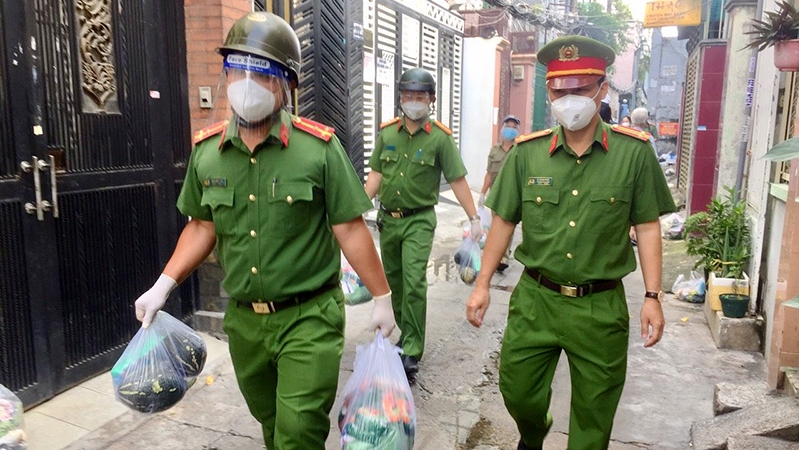 NDO - Ho Chi Minh City has seen encouraging results after two weeks of implementing enhanced social distancing measures to prevent the spread of COVID-19. The municipal government and people are determined to curb the epidemic soon and bring life back to the new normal state.

Since August 23, the city has received huge support from the central government and localities as tens of thousands of medical workers, police officers and soldiers have been dispatched to the city to help with the battle against COVID-19, along with numerous volunteers.

According to Ho Chi Minh City Vice Chairman Duong Anh Duc, epidemic prevention measures have been implemented aggressively in the spirit that each commune, ward, office and factory is a fortress and each resident is a soldier.

By asking local people to stay where they are, road traffic has fallen by 85% compared to before the imposition of strict measures. Movement into and out of residential neighbourhoods has also been tightened and the people are basically complying with the city’s requirements.

The movement of self-defending the “green zones”, where infection risks are low, has gained encouraging results. Ho Chi Minh City has also administered 6.55 million of vaccine doses, with 84% of its population aged 18 and above receiving at least one shot.

Deputy Director of the Ho Chi Minh City Centre for Disease Control and Prevention Nguyen Hong Tam said that as of September 6, the city has largely completed screening tests in five areas. From the results of such tests, the municipal healthcare sector will introduce appropriate and timely measures in the coming time.

The city has also distributed treatment drugs to infected people who are quarantining at home and has achieved initial results in reducing the ratio of severe cases and deaths.

In the past 15 days, the city has continued in its efforts to take care of people who are struggling due to the epidemic. To date, the city has spent nearly VND6 trillion (US$263 million) on supporting disadvantaged people.

Ho Chi Minh City Chairman Phan Van Mai said distancing measures will continue until September 15 but there will be some adjustments. Accordingly, people in “green zones”, preferably those already vaccinated, are allowed to go shopping once a week, while people in “red zones”, where the risks remain high, will continue to rely on delivery workers for their grocery needs.

In order to put the epidemic under control before September 15, the city will step up medical measures, especially community testing, in order to separate infected people.

Measures will also be taken to help infected people who are quarantining at home to have early access to treatment drugs and healthcare support so as to prevent their conditions from worsening and suffering deaths at home. The city is aiming to have more than 90% of adults to be given at least one dose of vaccine and local authorities need to focus on inoculating at-risk peoples and people in key economic activities.

Furthermore, the task of ensuring social security for Ho Chi Minh City residents continues to be enhanced by using the city budget and mobilising resources from society so that no-one will be left without basic necessities.

Chairman Phan Van Mai emphasised that from now until September 15, the city will open step by step in the spirit that restrictions will only be relaxed when safety is guaranteed.