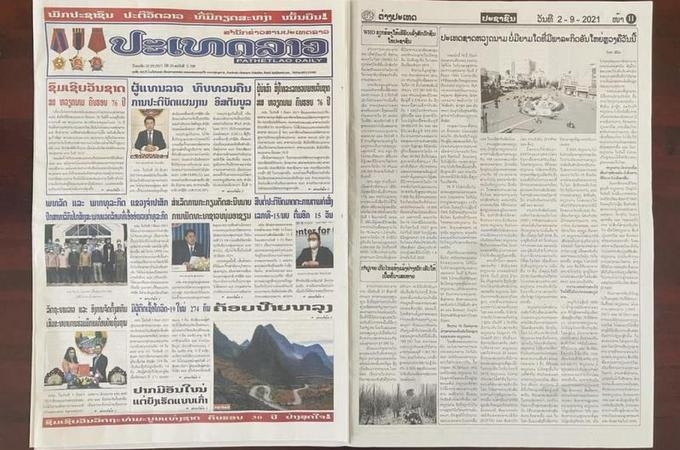 NDO/VNA - On the 76th anniversary of the National Day of the Socialist Republic of Vietnam (September 2), the PathetLao Daily frontpaged an editorial on Vietnam’s development process.

The editorial highlighted that 76 years ago, Vietnam was a small colonialised country but under the leadership of the Communist Party of Vietnam and with the steadfast will and determination, it has become a developing one.

It stressed that Vietnam's socialist-oriented market economy is developing strongly, with the business and investment environment becoming more and more stable, adding the country's position and role is increasingly enhanced in the international arena.

The newspaper noted that Vietnam and countries around the world are having to deal with the outbreak of the COVID-19 pandemic. However, under the timely direction of the Party and State and the people's cooperation and solidarity, Vietnam has achieved many important results in the fight as well as in socio-economic development.

Vietnam has provided medical equipment, supplies and financial support to 51 countries and international organisations to cope with the pandemic, the newspaper noted, highlighting that Vietnam has also received timely support in medical supplies and finance from many countries and international organisations to effectively carry out COVID-19 prevention and control work in the country.

The editorial stressed that Vietnam successfully organised the 13th National Party Congress, and the election of the 15th National Assembly and People's Councils at all levels in 2021.

It went on to highlight the close friendship between Vietnam and Laos, saying the two nations are not only closely linked in geography, but also share the history of their peoples fighting side by side and overcoming all difficulties and challenges to regain independence and freedom. The Vietnam-Laos relationship has become a rare model of bilateral relations in the world, the editorial said.

At a recent bilateral meeting with General Secretary and President of Laos Thongloun Sisoulith on the occasion of President Nguyen Xuan Phuc's official friendship visit to Laos, the two sides reaffirmed their goal of tightening and developing friendly relations.

The article congratulated Vietnam on the 76th anniversary of National Day and wished for the lasting friendship, special solidarity and comprehensive cooperation between Vietnam and Laos.