Home / News
Overcoming the pandemic with a revolutionary spirit
duonghanhnguyen 1-09-2021, 18:17 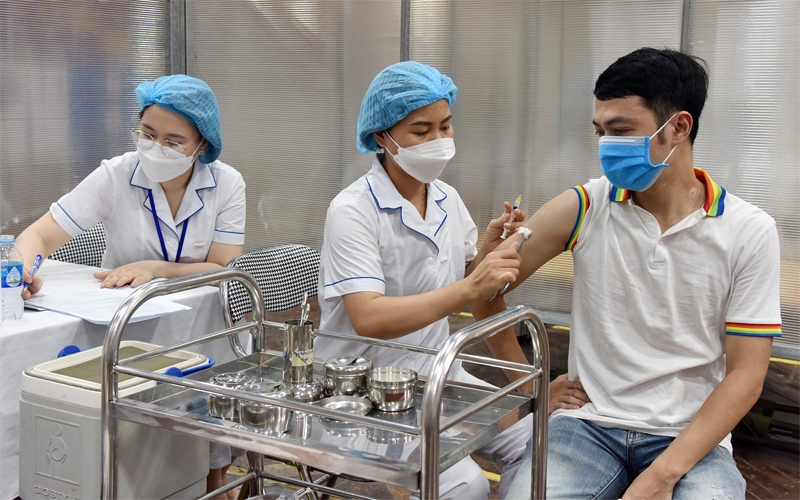 A Hanoi resident gets vaccinated against COVID-19. (Photo: Duc Anh)

NDO – Returning to work in Vietnam, Vietnamese-American journalist Nguyen Quang Truong travelled to all regions to reflect on the changes in the country, participating in many meaningful social activities. On the occasion of the 76th anniversary of the August Revolution and National Day (September 2, 1945-2021), he shared with Nhan Dan Newspaper about his thoughts on promoting the national strength and revolutionary spirit in the cause of national construction and development. as well as in the prevention and control of the current COVID-19 pandemic.

Autumn has arrived in the North. The summer days came to an end at a time when the whole country was straining to cope with the fourth outbreak of the COVID-19 pandemic. The epidemic and economic difficulties reminded me of 1945 when a famine in the north claimed the lives of two million innocent people. As historians have confirmed, the cause of the famine in 1945 was mainly due to the policy of rice plundering by the Japanese fascists and French colonialists. At the height of the famine, on March 9, 1945, the Japanese coup d’etat in French Indochina fell when the Viet Minh Front mobilised people to destroy the Japanese granaries in order to save themselves from hunger.

The hunger relief in 1945 was one of many activities of profound significance, contributing to promptly removing difficulties for people’s lives heavily affected by the malicious policies of the Japanese fascists, while at the same time uniting the whole nation to become the unified bloc that won the August Revolution. In the end of suffering, the revolutionary light was like a torch to illuminate the way, converging and leading the whole people not only to overcome the famine but also to join hands and carry out the August Revolution in 1945, the specific result of which was that on September 2, 1945, President Ho Chi Minh solemnly declared the country's independence.

Journalist Truong mentioned those great historical events because he wanted to emphasise the importance of the Communist Party of Vietnam when applying revolutionary theory into practice, no matter how difficult it is, it is still the point of confluence of the quintessence of the nation to solve all difficulties, helping people have faith in the strength of the national unity bloc.

It was the confluence of faith and strength that led the nation to overcome these difficult years with many sacrifices and losses to reunify the country on April 30, 1975. After that, the whole country continued to suffer together, while overcoming the consequences of war, and straining to cope with the countless difficulties of 20 years of unreasonable economic embargo.

During that process, the Communist Party of Vietnam demonstrated its bravery, intelligence, insight, organised and led the country to solve many intractable problems, successfully conducting Doi Moi (Renewal) project. The prestige and position of the country has been increasingly affirmed and the people’s lives are increasingly improving.

Growing up in the “post-war period”, journalist Truong belongs to a family of the old regime, leaving the country at the end of the 1980s. Having lived in the US for many years, he understands deeply what is separation. Over the past 46 years, there have been many classes of immigrants with different purposes and motivations, but most of them still keep an eye on their homeland, connecting the closeness between people at home and abroad with deep affection. There may be people leaving because of some disagreements, but for the most part in the overseas Vietnamese community, the love for the country, the homeland, and the hope for the motherland is inseparable. Living in a foreign land, the Vietnamese community still keep in their mind that they may live far away from their homeland, but their homeland never leaves them.

Returning to Vietnam to live and work in the press, he understood the correct views and policies of the Party and State regarding the overseas Vietnamese, and that the Party and State always respect and create favourable conditions for Vietnamese people to shorten their geographical distance, helping people understand and strengthen their faith in the country and the policy of great national unity bloc. Living in the country since the first outbreak of the COVID-19 pandemic, he has witnessed with his own eyes all the upheavals of this terrible pandemic. This is a very dangerous war with an "invisible enemy" that is more destructive and terrible than any weapon. In the fight against the pandemic, each country and place must pay the price and make sacrifices, and the effectiveness in the epidemic prevention and control is first of all attributable to the determination of the government, combined with the consensus and solidarity of the people.

When the COVID-19 pandemic broke out on a global scale, Vietnam controlled the epidemic, and soon implemented the production of a vaccine against COVID-19, and that is a point of pride. In 2020, while most of the world had to pay the price for subjectivity, Vietnam applied social distancing measures to limit the disease from spreading in the community. Aware of the danger, by all means, the Vietnamese Government has quickly come up with solutions and information dissemination to help people understand and unanimously strictly abide by epidemic prevention and control measures.

It can be seen that in some places in the world where there are people who lack awareness and overemphasise "human freedoms" making the prevention and control of the COVID-19 epidemic less effective. But in Vietnam, when the Government issued directives on social distancing, the whole political system got involved and the people showed their consensus.

Although there are some dissatisfactory things here and there, the panorama of the fourth outbreak of the COVID-19 pandemic also contains many meanings, which in his opinion is first and foremost a lesson in decision making with the revolutionary spirit, all for the country, for the people, and imbued with humanity. The fight against the pandemic is unprecedented in today’s world. Therefore, no country or government can claim complete victory.

Each phase of the anti-epidemic struggle brings lessons and experiences, which must be paid with the dedication and sacrifice of wealth and life. In the days of epidemic prevention and control, the journalist said he had experienced the values of the Party and the Government's devotion and care for the people. From central to local levels, the relevant departments and agencies have constantly updated the people on the situation, closely monitored all developments, and researched to find solutions, strategies and plans to deal with all situations. Devoted and flexible directions to think about and find ways to prevent and control the epidemic, while taking care of people's lives, stabilising production and business for economic development of leaders at all levels have received the esteem of the people.

There have been many stories of mutual love and affection in the community. There is bad and fake news sometimes, sometimes exaggerated negative phenomena, launched by bad elements in order to cause confusion in public opinion, create a bad image, and discredit the Party and Government, causing division among the people; but in his opinion, the Vietnamese people are always vigilant, selectively choosing information to understand, to have the right attitude. Above all, there is a positive and calm spirit under the organisation and leadership of the Party and State.

Since the fourth outbreak of the epidemic, journalist Truong has lived in Yen Bai city, in the northern mountainous province of Yen Bai which is considered very safe. But his mind is always moving towards hot spots in the south such as Ho Chi Minh City, Dong Nai and Binh Duong where his relatives and friends are facing the epidemic. He is still communicating with others through social media and finds that although it is difficult in many ways, most of them encourage each other to work together with extraordinary efforts.

Patriotism, compatriotism, belief in the leadership of the Party and the Government, lessons learned from the fight for independence, experiences through two resistance wars and victory over poverty have loaded in each Vietnamese a type of “vaccine” that helps them increase their mental resistance, energy, and perseverance to deal with all difficulties. He has seen that happening in many families, as grandparents told stories of hunger in the year of 1945, as parents recount difficulties during the subsidy period as a way to help their children have more psychological stability and increase their ability to endure and to overcome. The examples of the time of fighting for independence and defending the Fatherland are repeated by everyone through the images of medical staff, doctors and volunteers on the front lines who are silently fighting for the country.

A lot of actions, examples of sacrifices for people and for the country have emerged from the silent heroes on the front lines against the COVID-19 epidemic. The dedication, revolutionary spirit, devotion to the country and people, and the willingness to sacrifice themselves for peace is no different from the soldiers on the front during the war for independence and freedom of the Fatherland.

Looking back at the historical milestones from the August Revolution, the day of national reunification April 30, 1975 to the present, the fight against COVID-19, journalist Truong expresses his strong belief in the leadership of the Party and State and in the understanding and perception of Vietnamese people about the country. The Vietnamese people, wherever they are, at home and abroad, always look towards the same place. The spirit of mutual affection always dominates their thoughts, because the common nature of THE Vietnamese people is to endure and love and share when there are difficulties. The Party, Government, the entire political system and the whole people are still trying their best to overcome the pandemic.

In that context, this year's National Day has become more and more meaningful, helping each Vietnamese person raise their sense of responsibility, joining hands with the Party and Government in the fight against COVID-19. History has proven that the Vietnamese people are always indomitable, self-respectful and always stand firm despite having to go through many challenges and hardships. With the spirit of the August Revolution, with the confidence that the whole people have placed in the Party and the Government, the pandemic will definitely be repelled.