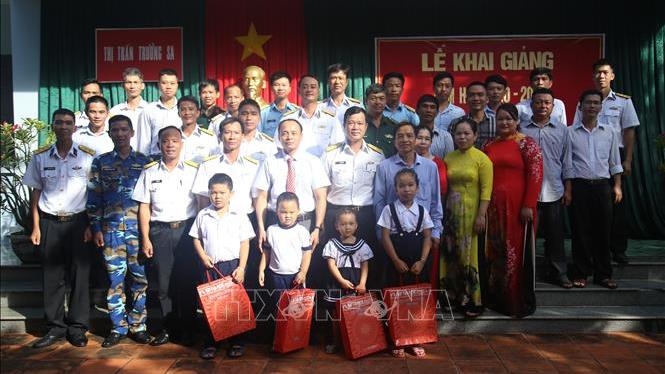 The event at Truong Sa town school was attended by the Chairman of the town People’s Committee Ngo Van Hung, who beat the drum to kick start the new academic year.

Local authorities and forces stationed in the island district presented gifts to the students during the ceremonies at the three schools to encourage them to gain the best results possible during the new school year.

Classes will officially start on September 5.

The opening ceremonies of schools in other localities in Khanh Hoa province are scheduled for September 13, depending on the local COVID-19 situation.

* Also this morning, nearly 700,000 secondary and high school students in Ho Chi Minh City celebrated the beginning of the 2021-2022 school year with virtual ceremonies due to the complicated developments of COVid-19 in the city.

Classes will start on September 6 in online form and virtual learning is planned to last until the first semester of the new academic year for elementary, secondary and high school students.

A similar event will be held on September 7 for elementary students while kindergartens will return to school when the pandemic is brought under control.

The municipal Education and Training Department has proposed the municipal People’s Committee begin vaccinating students aged 12-18 if there is a suitable vaccine source so that they can return to school in the second semester.

According to Director of the municipal Education and Training Department Nguyen Van Hieu, up to 80% teachers in the city have received their first dose of a COVID-19 vaccine.