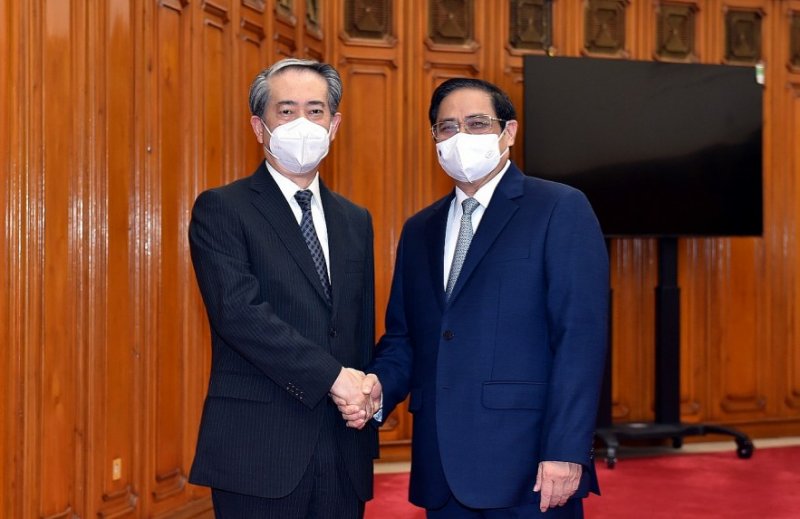 During a reception for the Chinese Ambassador to Vietnam Xiong Bo in Hanoi on August 24, the Vietnamese Prime Minister stressed that Vietnam consistently pursues the foreign policy of independence, self-reliance, multilateralization, and diversification of ties, proactive and active international integration, and being a responsible member of the international community. Vietnam does not ally with one country to fight the other.

He wished that both sides would enhance political trust between the two Parties and nations, promote exchanges at all levels, boost comprehensive cooperation and uphold the Steering Committee on Vietnam-China Bilateral Cooperation mechanism, VNA cited.

He reaffirmed that Vietnam remains consistent with its foreign policy of independence, self-reliance, multi-lateralization, and diversification of external relations, proactive and active international integration. Vietnam will not join any alliance or align with one country against another.

Prime Minister Pham Minh Chinh extended thanks for the Chinese Government's donation of two million vaccine doses to Vietnam. He said this is valuable and timely support which reflects the spirit of solidarity and mutual assistance during this hard time, asking the Chinese side to continue vaccine supply and transfer vaccine and drug production technology to, and share Covid-19 prevention experience with Vietnam. Pham Minh Chinh expected that both sides will work together to strengthen political trust between the two Parties and States, accelerate exchanges and contacts at all levels. (Photo: VNA)

The Vietnamese PM also asked the Chinese side to increase the import of Vietnamese goods, especially farm produce, and coordinate in resolving obstacles in some projects, including the Cat Linh-Ha Dong metro project.

On Bien Dong Sea issue, PM Pham underscored that both sides need to strive to main peace and stability, satisfactorily disagreements at sea in the spirit of high-level common perceptions, the agreement on basic principles guiding the settlement of sea-related issues and abide by international law, including the 1982 United Nations Convention on the Law of the Sea.

Ambassador Xiong, for his part, affirmed that the Chinese Party and Government attach importance to ties with Vietnam, and stay ready to boost political trust and consider increasing vaccine supplies to the country.

He said that China did not pursue trade surplus with Vietnam. It is willing is address bottlenecks in export-import, consider opening market for the Vietnamese high-quality goods, and complete several key projects soon. China wants to well control disagreements and satisfactorily settle issues at sea with Vietnam in line with high-level common preceptions, the ambassador said.