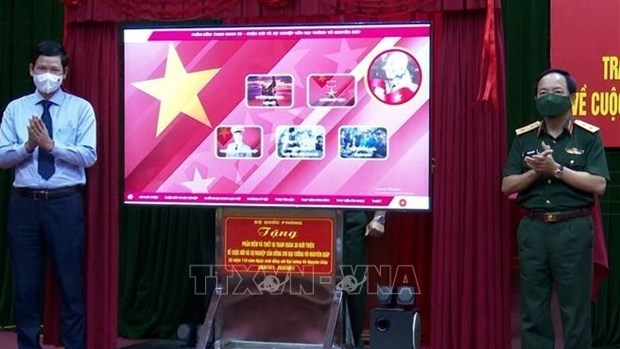 At the handover ceremony (Photo: VNA)

NDO/VNA - The Ministry of National Defence on August 24 presented a 3D holographic-display system introducing the life and career of late General Vo Nguyen Giap to the central province of Quang Binh - the General’s birthplace, on the occasion of his 110th birth anniversary (August 25).

The system was developed by the Vietnam Military History Museum together with relevant agencies in nearly two months.

Applying new technology, it introduces outstanding historical locations with connections to the late General, more than 20 of his remembrances, life and career, along with file photos, documentaries and songs about General Vo Nguyen Giap, among others.

The provincial Department of Culture and Sports and the Quang Binh General Museum will be responsible for the operation of the system, in an effort to raise public awareness of the General and strengthen people’s belief in the “Doi moi” (Renewal) cause initiated by the Party, thereby fostering patriotism amongst people from all walks of life.

On the same day, a delegation of the Defence Ministry offered incense to the General at his grave in Yen island of Quang Trach district and visited a memorial house in his hometown of Le Thuy.

General Vo Nguyen Giap, whose real name is Vo Giap (alias Van), was born in Loc Thuy commune, Le Thuy district, the central province of Quang Binh on August 25, 1911. He passed away in Hanoi on October 4, 2013 at the age of 103.

The General, whose military career started with his appointment to lead the first Vietnamese revolutionary army unit with only 34 soldiers in 1944, led the Vietnamese people's army from victory to victory during the resistance war against French colonialists and then American imperialists.