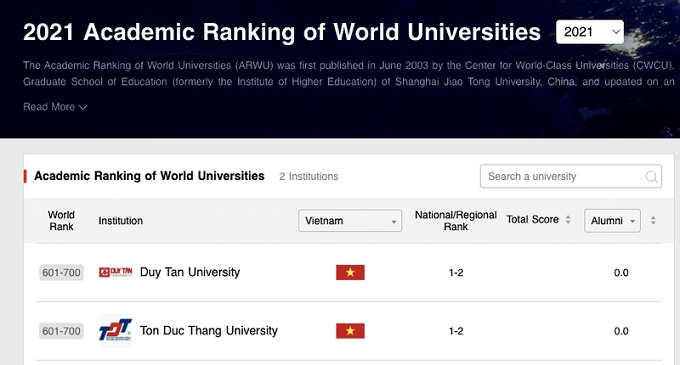 Two Vietnamese universities in the ARWU 2021.

NDO – Two Vietnamese representatives have been listed among the institutions in the Academic Ranking of World Universities (ARWU) 2021.

Previously, Ton Duc Thang University became the first higher education institution in Vietnam to enter the ARWU in 2019, in the 901-1000 group. The university was also the only one listed in the ranking in 2020, jumping to the 701-800 group.

The Academic Ranking of World Universities was originally compiled and issued by Shanghai Jiao Tong University in 2003 but has been published and copyrighted annually by Shanghai Ranking Consultancy.

ARWU evaluates universities worldwide based on self-built scientific databases, with criteria including: quality of education, quality of lecturers, scientific research, and academic productivity per capita.