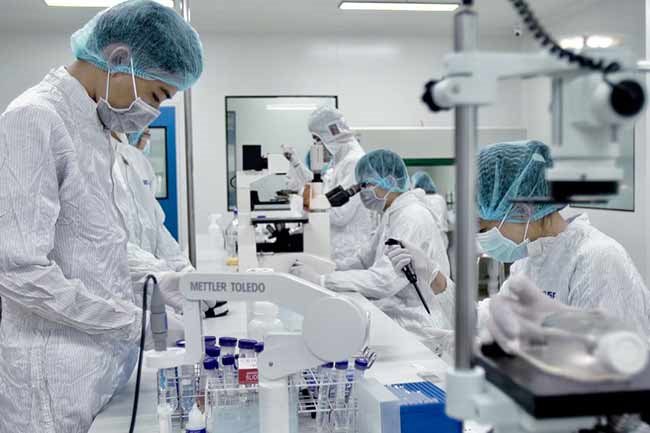 Scientists of Nanogen Pharmaceutical Biotechnology JSC research the Nano Covax vaccine. The third trial phase of the vaccine will not be expanded – PHOTO: TNO

HCMC - Nanogen Pharmaceutical Biotechnology JSC, the producer of Vietnam’s Nano Covax vaccine, and units in charge of the human trial of the vaccine have announced that the trial cannot be expanded as proposed by some localities and enterprises.

Earlier, Ha Nam, Khanh Hoa and Binh Duong had written to the Ministry of Health, proposing conducting the third trial phase of the vaccine on their residents, Phap Luat Online newspaper reported.

Similarly, some firms, such as the Minh Phu Seafood Corporation, had also signed a memorandum of understanding with Nanogen, ordering hundreds of thousands of doses of the vaccine.

According to the Ministry of Health, the expansion of the trial needs careful preparation to ensure safety, feasibility and compliance with medical ethics.

Nanogen and the Vietnam Military Medical Academy and the HCMC Pasteur Institute, which are in charge of the vaccine trial, must prepare and submit reports to the Research Ethics Committee for appraisal before seeking the Ministry of Health’s approval.

However, both the Vietnam Military Medical Academy and the HCMC Pasteur Institute have proposed continuing the trial based on the approved plan and not raising the scale of the trial. Nanogen has also advised against the larger scale of the trial amid the worsening pandemic.

Today, August 16, the Research Ethics Committee will assess a mid-term report by the three units on the third trial phase.

In addition, the Drug Administration of Vietnam under the Ministry of Health is completing a draft circular on the registration for the circulation of Covid-19 vaccines in emergency cases.

The draft circulation, if approved, together with the National Assembly’s Resolution 30 and 268 and the Government’s Resolution 86 will create a favorable legal corridor for the early approval of Nano Covax, even if it is under the third trial phase.