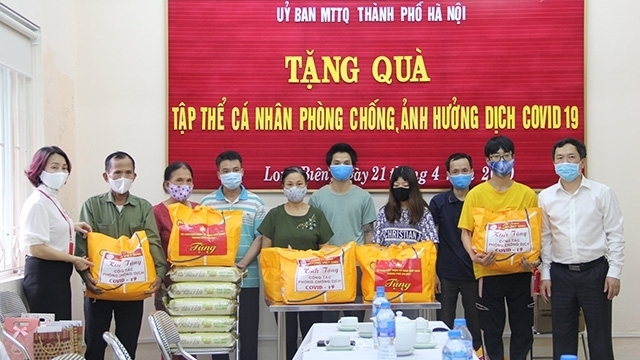 NDO – The Hanoi municipal People’s Council recently issued three resolutions to support people in the city and help them overcome the difficulties caused by the COVID-19 pandemic.

Under a Resolution No. 15/NQ-HDND, the municipal People’s Council approved aid packaged worth VND345 billion for 10 groups of people in the city whose livelihoods have been affected by COVID-19 pandemic.

In Resolution No. 16/NQ-HDND, the municipal People’s Council implemented a 15% price cut in water bills of local households in the last four months of this year.

In addition, the city will cover 100% water bills for local concentrated quarantined areas and treatment facilities for infected and suspected COVID-19 patients, poor and near-poor households.

The city authorities have also decided to cover expenses for funeral services for deceased COVID-19 patients under Resolution No. 17/NQ-HDND. On this occasion, the VFF’s chapter in Dai Loc district, Quang Nam province also mobilised local people to donate 5 tonnes of rice and more than 25 tonnes of vegetables and fruit to support Da Nang residents.

* The Tra Vinh provincial People’s Committee has approved an aid package worth VND43.7 billion to support 31,000 informal workers affected by COVID-19 in the province, following Government issued Resolution 68/NQ-CP on some policies to support employees and employers hit hard by the COVID-19 pandemic.

Of which, VND23 billion has been disbursed to benefit 15,500 no-contract workers, most of them motorbike taxi drivers, trash collectors, porters, and masons.