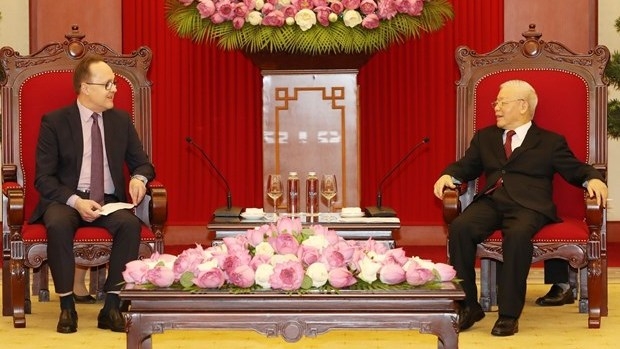 NDO/VNA - The Vietnamese Party, State and people have consistently treasured and promoted cooperative relations with Russia, General Secretary of the Communist Party of Vietnam (CPV) Nguyen Phu Trong has said.

Receiving newly-appointed Russian Ambassador to Vietnam Gennady Bezdetko in Hanoi on August 13, the Party leader affirmed that Vietnam always appreciated the wholehearted support and assistance that the former Soviet Union and the current Russian Federation have given to the Southeast Asian country.

He expressed his delight at the fruitful development of bilateral ties in all spheres, even amid adverse impacts from the COVID-19 pandemic, adding that senior leaders of the two nations have regularly held online conversations and phone talks.

Vietnam and Russia have shared common stances on almost all international issues, and closely coordinated with and supported each other at regional and global multilateral forums, the Party chief said.

Relations between the CPV and political parties of Russia have seen new strides, contributing to the enhancement of Vietnam-Russia ties, he added.

As Vietnam and Russia are celebrating the 20th founding anniversary of strategic partnership in 2021 and entering the second decade of comprehensive strategic partnership, the Party leader hoped that the two countries will continue making greater efforts to lift the bilateral relationship to a new height.

Having thanked Russia for its assistance to Vietnam in the fight against COVID-19, he proposed agencies and organisations of the two nations further boost cooperation in pandemic prevention and control, including the supply of vaccines and transfer of vaccine production technology to Vietnam.

The Party General Secretary believed that Ambassador Bezdetko, with years of working experience and close ties with Vietnam, will continue making positive and effective contributions to the fraternal Vietnam-Russia relationship in the coming time.

For his part, Bezdetko affirmed that Russia has attached great importance to its comprehensive strategic partnership with Vietnam and considered Vietnam a priority in Russia’s foreign policy in Asia-Pacific.

The diplomat thanked Vietnam for its donation of medical supplies and equipment for the COVID-19 fight, especially in 2020 when Russia faced difficulties.

Russia is willing to cooperate with Vietnam in COVID-19 prevention and control, and relevant organisations of the two countries are scheduled to sign contracts to supply vaccines for Vietnam in the near future, he said.

The Ambassador said he is always willing and will try his best to further promote Russia-Vietnam relations to a new height.