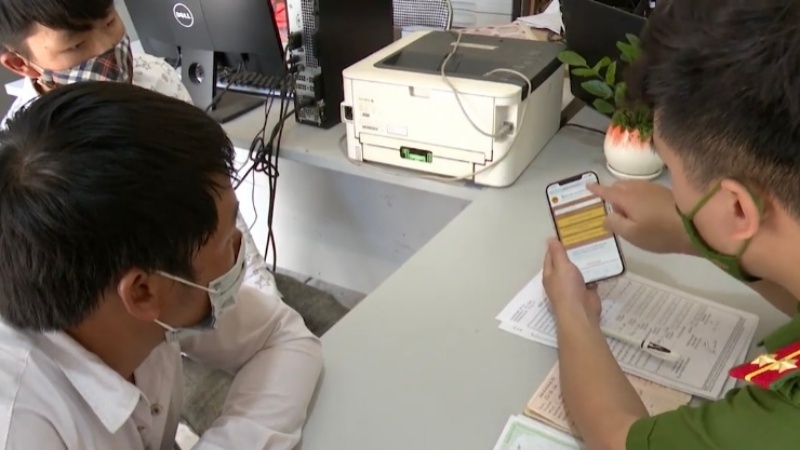 Police in Chieng Son commune (Moc Chau, Son La) instructing people on how to declare residential information via their smartphones.

NDO - Currently, in some areas where ethnic minorities live, due to limited economic, technological and educational conditions, accessing the new regulations of the Law on Residence still faces many difficulties. The police force is actively organising communication activities and seminars to help people catch up with the changes in the digital transformation period.

From July 1, 2021, when the Law on Residence 2020 took effect, the replacement of residence, permanent and temporary residence management from manual methods with paper books to modern management methods using information technology has been considered a new step, bringing benefits and convenience to people, helping people reduce administrative procedures, in line with the trend of digital transformation and the era of the fourth industrial revolution or Industry 4.0.

However, for mountainous and border areas where many ethnic minorities live, economic conditions are still difficult, and people's education is still low, this change is currently facing dificulties. It takes a lot of time to change long-standing habits and the lifestyles of the ethnic minorities here.

Recording at the police office in Chieng Son commune, Moc Chau district, Son La province, Song A Su, from Suoi Thin village, went to the commune police office to declare the family's residential information. Su said he lives in a remote area, the police force has disseminated information, but he did not know how to declare using his phone, moreover, his phone only has a call function, with no internet connection.

Understanding the reality, the Chieng Son Commune Police guided Su wholeheartedly and thoughtfully, introducing the declaration software, how to register for residence through the online system, helping him understand a little more about the new method of declaring his information.

People can register for permanent residence more easily; the time needed has also been shortened to no more than 7 days; encouraging residents to register their residence through the online system to reduce travel time.

However, since the implementation, in Moc Chau district, the number of people registering through the online system is still very small. Currently, people in border areas, with difficult conditions, have no awareness of the Law on Residence, and at the same time do not have the ability to use smartphones, so they cannot access the portal to register.

“People who have smartphones mainly use them to read newspapers and watch movies, but do not know how to access the portal to register. Guiding people is considered a difficult problem,” said Lieutenant Colonel Yen.

In order to help ethnic minority people access the Law on Residence, Moc Chau District Police went to the village, to each house, to educate people, in the form of both centralised mobilisation through village meetings and individual mobilisation. In 2020 and the first six months of 2021, the police forces of districts and communes have carried out hundreds of propaganda campaigns with thousands of participants. However, in order to help people access modern information technology, changing thinking, thinking habits, and habits in general, is a lengthy process.

Captain Hoang Quoc Quan, Deputy Chief of Police of Chieng Son commune, Moc Chau District, Son La Province said the police force of Chieng Son commune has propagated, mobilised and guided people. But due to the many limitations in terms of awareness and difficult economic conditions, people do not always have the ability to buy high-tech phones. Therefore, people still go to the commune police office to conduct business the old way.

Lieutenant Colonel Dinh Van Hien, Deputy Chief of Police of Moc Chau district, Son La province, said that in the coming time, the police in Moc Chau district will assign the police in communes and townships to continue to propagate to people, and at the same time continue to train cadres and soldiers to improve their qualifications in the field of administrative management in order to better serve the people.

Today, 20:36
Here’s what the relations between Japan, the U.S. and Vietnam with China look like