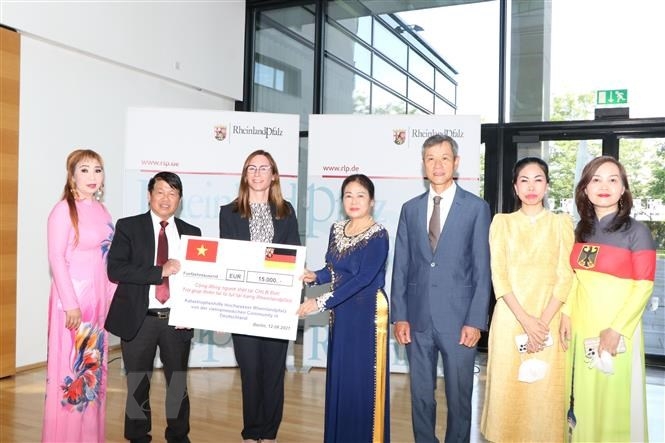 NDO/VNA – The Vietnamese community living and working in Germany have donated EUR30,050 to help people in two flood-affected states in this European country.

At a ceremony on August 12 to hand over EUR15,000 worth of donations to representatives from Rheinland-Pfalz state, Vietnamese Ambassador to Germany Nguyen Minh Vu expressed sympathy to people in Rheinland-Pfalz and Nordrhein-Westfalen states, who are facing difficulties caused by serious flooding recently.

Trinh Thi Mui, head of the fundraising board said that the Vietnamese community in Germany consider the country their second homeland. Witnessing the heavy consequences of natural disasters in the two western states of Germany, the Vietnamese community in Germany has responded to the appeal for donations to share some of the difficulties with the people affected by the flood.

According to Mui, the board has received a total of EUR30,050 from 382 individuals, families, businesses and associations.

The historic flooding last July devastated Rheinland-Pfalz and Nordrhein-Westfalen states, destroying most infrastructure and claiming the lives of at least 191 people, while tens of thousands of people were injured.