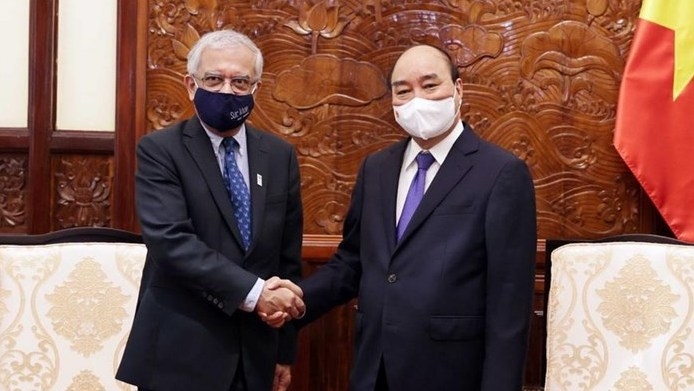 NDO/VNA - Vietnam has been and will continue to be an active member of the international community and the United Nations (UN), affirmed President Nguyen Xuan Phuc while hosting outgoing UN Resident Coordinator in Vietnam Kamal Malhotra in Hanoi on August 12.

The President stated Vietnam will continue to make proactive and responsible contribution to the UN Security Council, join UN peacekeeping activities, and step up the implementation of UN sustainable development goals and climate-change commitments under the Paris Agreement.

Phuc stated Vietnam treasures UN organisations’ valuable support and cooperation over the past more than four decades, and appreciates their active role in helping the nation respond to COVID-19. He asked the UN to continue giving Vietnam timely policy advice as well as technical and financial support.

The State leader reiterated that Vietnam attaches importance to multilateralism and international law and backs the UN in promoting its central role in boosting solidarity and collaboration among nations to tackle global challenges, sustain international peace and security, and foster prosperity.

For his part, Malhotra thanked Vietnamese public agencies and sectors for their assistance for UN organisations and himself. He affirmed UN organisations in Vietnam want to help the nation carry out its domestic development priorities and promote its role and position in the global stage.

He said that the highest priority of UN organisations now is to support Vietnam’s COVID-19 response, especially in accessing vaccine through the COVAX Facility and in the transfer of vaccine production technologies so that Vietnam can be self-sufficient in this regard.

Vietnam has an increasingly important role and voice in the UN thanks to its active and responsible participation in and contribution to common affairs of the international community and the UN, Malhotra stated, adding that UN organisations will continue to support and accompany the country in its national development cause.