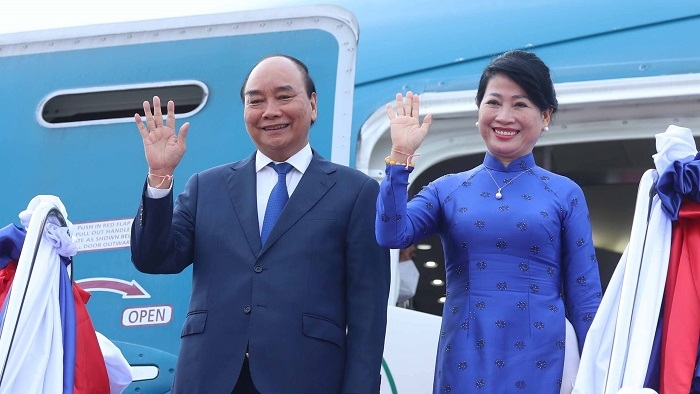 During the visit, on August 10, the President laid a wreath at a monument dedicated to unknown martyrs, met Chairman of the National Assembly of Laos Saysomphone Phomvihane, received Vice Presidents Pany Yathotou and Bounthong Chitmany, attended and delivered a speech at a meeting of the ninth Lao legislature.

Phuc also attended a ceremony to inaugurate and hand over the Lao National Assembly House, visited the Vietnamese Embassy in Laos and talked with its staff and representatives of Vietnamese businesses in Laos.

At meetings with Lao leaders, President Phuc expressed support for closer coordination between the two legislatures in supervision work in order to promote the effective implementation of signed high-level agreements. He also wanted the two legislatures to continue working together and offering mutual support at regional and global parliamentary forums, and collaborating effectively in regional and global issues for the sake of peace, stability, cooperation and development.

Talking with the two Vice Presidents, President Phuc suggested the two countries continue working effectively together to realise signed high-level agreements, boost joint work in all areas, and help each other, especially border localities, in fighting the pandemic and restoring socio-economic development.

In his speech to the ninth Lao NA’s meeting, the Vietnamese State leader highlighted two messages that the two countries stand united and firmly move forward on the road to socialism on the basis of Marxism-Leninism and the similar thoughts of Presidents Ho Chi Minh and Kaysone Phomvihane, and that they should work to enhance their economies' quality and efficiency, garner international support, improve connectivity between the two economies and seek new cooperation areas.

Lao NA Chairman Phomvihane affirmed that the two legislatures will bolster their cooperation to contribute to fostering great friendship, special solidarity and comprehensive partnership between the two nations.

Later, President Phuc joined Lao Party General Secretary and President Thongloun Sisoulith and top legislator Phomvihane in co-chairing the ceremony to inaugurate and hand over the Lao NA House as a gift from Vietnam to the Lao side.

Before leaving Laos, the President met and talked with the Vietnamese embassy staff and representatives of Vietnamese businesses and the Vietnamese community in Laos. He took the occasion to hail them for holding practical activities toward the homeland.