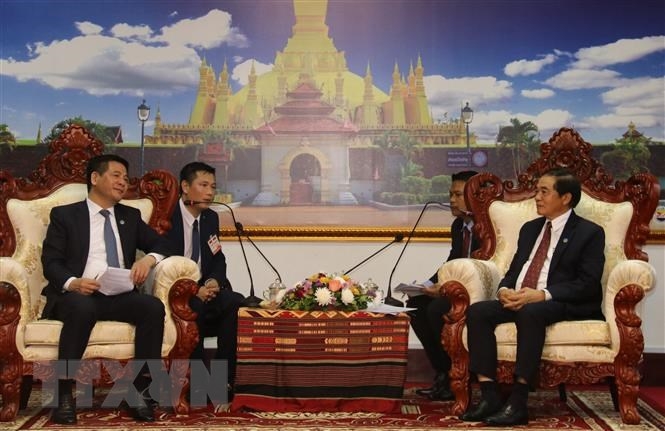 NDO/VNA – Vietnamese officials met in Vientiane on August 9 with their Lao counterparts to discuss ways to step up bilateral cooperation in industry, trade and justice as they were accompanying President Nguyen Xuan Phuc in his ongoing official visit to Laos.

In the meeting between Vietnamese Minister of Industry and Trade Nguyen Hong Dien and his Lao counterpart Khampheng Xaysompheng, both sides expressed their delight at the recovery of the two-way trade in the first half of 2021, laying solid foundation for lifting the trade growth to 10% this year as planned by the two governments.

They agreed to accelerate talks to soon conclude a protocol amending the 2015 Vietnam-Laos trade agreement which is expected to be inked this year. They will also urge relevant agencies from both sides to fully implement the commitments of the bilateral border trade agreement.

Dien emphasised the importance of the construction of an expressway connecting Hanoi and Vientiane, saying it would form a basis for his ministry to encourage and support more Vietnamese enterprises to invest in Laos to make the most of the two nations’ potential for cooperation.

He later took the occasion to invite Lao Minister of Industry and Commerce Khampheng Xaysompheng to visit Vietnam at the earliest convenience and suggest the two countries hold a joint conference for cooperation in and development of industry and trade, and energy and mining in Vietnam.

On the same day, Vietnamese Minister of Justice Le Thanh Long met with his Lao counterpart Phaivy Siboualipha, who thanked Long and his ministry for always assisting and sharing experience with Laos. Minister Long, for his part, proposed the two sides further deepen judicial ties via the periodic judicial conference between their border-sharing provinces and exchanges of delegations, documents and legal papers.

He also asked his host to speed up the granting of Lao citizenship to eligible Vietnamese people under the bilateral agreement on settlement of free migration and to jointly launch talks on an agreement on mutual legal assistance in civil matters.