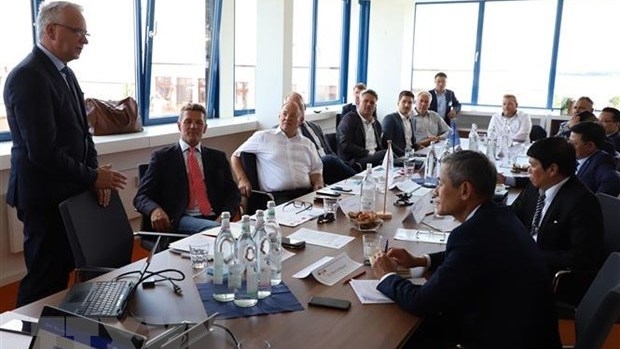 State Secretary in the Ministry of Economics, Labour and Health of the state Stefan Rudolph speaks at the event (Photo: VNA)

During a working session on August 6 held at Warnemünde Maritime Simulation Centre, State Secretary in the Ministry of Economics, Labour and Health of the state Stefan Rudolph expressed his wish to enhance cooperation between Germany and Vietnam, and between the state and Vietnam in particular.

Rudolph also hoped that bilateral traditional ties will be expanded in the near future with new orientations, including the transfer of new technologies to defuse bombs and mines, settlement of post-war consequences, and socio-economic development.

Speaking at the event, Vu said Mecklenburg-Vorpommern is one of the states to pioneer in cooperation with Vietnam, including maritime services. Two-way trade between two nations surpassed US$14 billion last year, and Vietnam is now Germany’s largest trade partner in ASEAN while Germany is Vietnam’s biggest trade partner in the European Union.

He believed that bilateral ties will be further extended with new cooperation opportunities.

Leaders of the Warnemünde Maritime Simulation Centre also briefed the ambassador about maritime control network in Baltic Sea while representatives of several companies introduced their strength.