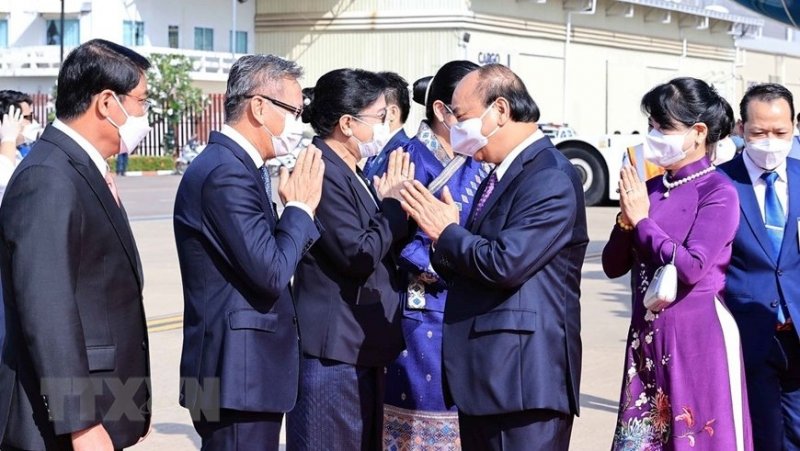 President Nguyen Xuan Phuc, his spouse, and a high-ranking delegation of the Vietnamese Party and State at Wattay International Airport. (Photo: VNA)

NDO/VNA – President Nguyen Xuan Phuc, his spouse, and a high-ranking delegation of the Vietnamese Party and State arrived in Vientiane on August 9 morning, beginning a two-day official friendship visit to Laos at the invitation of General Secretary of the Lao People's Revolutionary Party (LPRP) Central Committee and President of Laos Thongloun Sisoulith.

Welcoming the Vietnamese State leader at Wattay International Airport were Politburo member, Deputy Prime Minister and Minister of Planning and Investment of Laos Sonexay Siphandone; Minister-Chairman of the Presidential Officice Khemmany Pholsena; head of the LPRP's Commission for External Relations Thongsavanh Phomvihane; Vientiane Governor Mayor Atsaphangthong Siphandone; Vietnamese Ambassador to Lao Nguyen Ba Hung, along with representatives from a number of Lao agencies and the Vietnamese community in Laos.

During the visit, President Phuc is scheduled to hold talks with LPRP General Secretary and President of Laos Thongloun Sisoulith, following which the leaders will witness the signing of many important cooperation documents in the areas of justice, anti-drug, search and rescue, along with deals among localities and businesses.

The Vietnamese State leader will have meetings with the Lao Prime Minister, National Assembly Chairman, and a number of former Party and State leaders of the neighbouring country.

He will deliver an important speech at the 9th National Assembly of Laos during its ongoing first plenary session, and attend a ceremony to hand over the NA House - a gift of the Party, State and people of Vietnam - to Laos.

As scheduled, President Phuc will also receive the head of the Lao Front for National Construction and the President of the Laos-Vietnam Friendship Association, and visit the Vietnamese Embassy in Vientiane where he will meet Vietnamese people and businesses in the country.