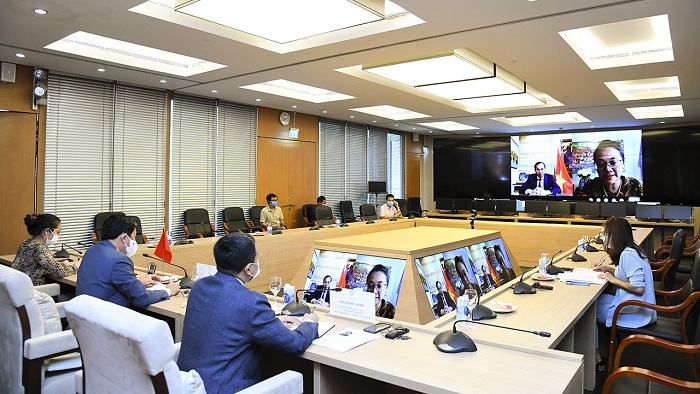 An overview of the meeting (Photo: quochoi.vn)

NDO/VNA – Head of the National Assembly (NA) Committee for External Relations Vu Hai Ha had an online meeting with United Nations (UN) Under-Secretary-General and Executive Secretary of the UN Economic and Social Commission for Asia and the Pacific (ESCAP) Armida Salsiah Alisjabana on August 5 to discuss measures to bolster cooperation in implementing Sustainable Development Goals (SDGs) in Vietnam.

At the meeting, Ha said that the NA has played an important role in promoting the implementation of the SDGs by adopting laws and national strategies as well as budget allocation for development programmes related to the SDGs, while verifying and ratifying international conventions on human rights and socio-economic matters.

He underscored that Vietnam coordinated with the International Parliamentary Union (IPU) to adopt the Hanoi Declaration 2015 with the theme “The Sustainable Development Goals: Turning Words into Action,” and organise many meetings and conferences on sustainable development.

Briefing the UN official on Vietnam’s situation and progress of SDGs, Ha said that despite adverse impacts of COVID-19, Vietnam has successfully organised a number of important political events to complete its leadership structure and sketch out future development orientations.

Vietnam has completed 16 out of 17 general targets and 115 out of 169 detail goals, he said, adding that Vietnam has issued a roadmap for the implementation of the SDGs to 2030.

Currently, the country is implementing the “twin targets” of preventing and controlling COVID-19 and boosting economic recovery and development at the same time, ensuring people’s livelihood and social security, he said.

He noted that last year, Vietnam was among a few countries with positive growth and is forecast to continue to enjoy 6-6.5% of expansion in 2021. However, since late April, the country has been hit hard by the fourth COVID-19 wave of outbreaks due to the fast spreading of Delta variant, he added.

Ha said that the Prime Minister has issued a national Action Plan to realise the 2030 Agenda for Sustainable Development, with specific targets and tasks as well as responsibility for particular ministries, sectors, agencies and localities.

He proposed that the UN and the UNESCAP give more support to Vietnam in holding meetings, conferences as well as personnel training to enhance the capacity of lawmakers and NA agencies in law-making and supervision over the implementation of SDGs, thus optimising the NA role in the process.

For her part, Armida Salsiah Alisjabana lauded the role and efforts of the Vietnamese NA in promoting the implementation of SDGs, affirming the UNESCAP's commitments to assisting Vietnam and the NA in realising the goals.

Underscoring that COVID-19 is threatening the completion of the SDGs in Asia-Pacific region, she asked the Vietnamese NA to promote its role as an active member of the IPU bodies and the ASEAN Inter-Parliamentary Assembly (AIPA), thus connecting parliaments in hastening and supervising the process, ensuring the effective implementation of policies regarding SDGs.