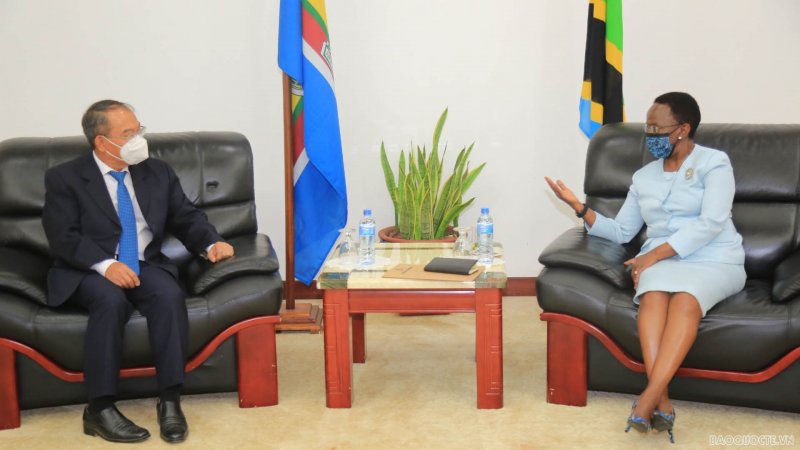 Ambassador Tien, who paid a courtesy visit to the Tanzanian FM, congratulated Tanzania for its election as Vice President of the 76th General Assembly of the UN in June this year.

He said Vietnam is willing to share experience with Tanzania in national development, economic transition, poverty reduction and improvement of living standards.

According to the diplomat, trace-investment is a bright spot in bilateral ties, with Vietnam being the largest buyer of raw cashew nuts from Tanzania in recent years. He hailed the pioneering role of the Viettel Tanzania (Halotel) in universalizing mobile phone and internet networks to remote areas in the African country, contributing to creating jobs and incomes for local residents and fulfilling its tax obligation to the Tanzanian Government.

Ambassador Tien proposed that the two countries continue to exchange information via the channels of the State, party and the legislature body so as to enhance mutual political trust and support for development.

He noted that there is great potential for bilateral collaboration, when bilateral trade turnover in 2020 stood at just US$300 million as against Vietnam’s total foreign trade of US$545 billion. He asked the Tanzanian Government to facilitate the operation of Viettel Tanzania and assist Vietnamese firms in looking for business opportunities in Tanzania.

Minister Mulamula hailed the role of the Viettel Tanzania company, and called on Vietnamese firms to invest in cashew nut processing in Tanzania.

He voiced approval of proposals from the Vietnamese Ambassador, and affirmed that the country will continue to support Vietnam in multilateral mechanisms.