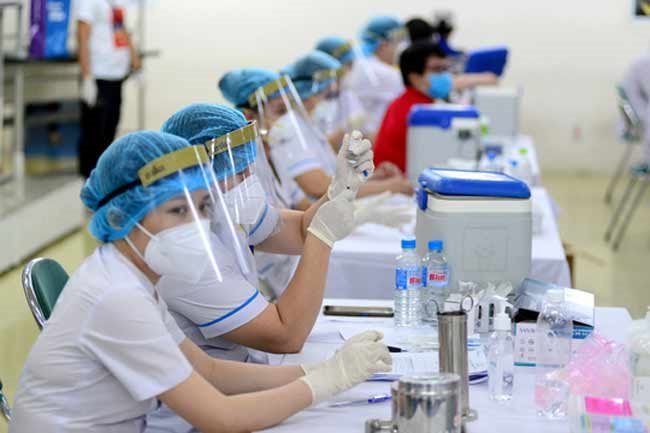 Medical workers at a Covid-19 vaccination site in HCMC. The Ministry of Health has reported 3,943 new Covid-19 cases – PHOTO: NLDO

HCMC – The Ministry of Health this morning, August 5, reported 3,943 fresh Covid-19 cases, including two imported cases and 3,941 domestic infections, with 1,008 cases being infectious while in the community.

In addition, 92 other cases were detected in Danang, 66 in Ba Ria-Vung Tau, 58 in Vinh Long, 35 in Binh Dinh and 32 in Dong Thap. The remaining cases were recorded in 13 other localities.

Thus, the number of new Covid-19 cases this morning was 326 lower than the figure recorded yesterday morning.

At a meeting with the U.S. Agency for International Development (USAID) on August 4, the Ministry of Health noted Vietnam had signed a contract to buy 31 million Pfizer vaccine doses and was completing procedures to buy another 20 million doses. However, 47 million doses will arrive in Vietnam next quarter.

The ministry sought help from USAID to accelerate the vaccine supply to Vietnam.

In related news, the Ministry of Transport has approved the Daklak government’s proposal to suspend passenger flights on the HCMC-Buon Ma Thuot route from 0 a.m. on August 5.

On August 1, the Daklak government proposed suspending commercial flights to its airport while Buon Ma Thuot is practicing social distancing under the prime minister’s Directive 16.

The Ministry of Transport asked the Civil Aviation Authority of Vietnam to inform airlines and the relevant agencies of the decision.

The Civil Aviation Authority of Vietnam will consider the licensing of flights transporting medical workers and equipment.