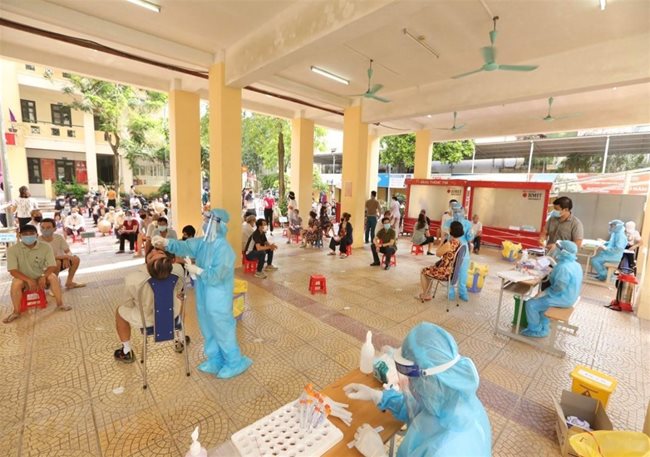 Medical workers take samples from residents in Hanoi City for Covid-19 testing. The Ministry of Health this morning, August 2, confirmed 3,201 fresh Covid-19 cases, including three imported cases and 3,198 domestic ones in 20 provinces and cities - PHOTO: VNA

HCMC - The Ministry of Health this morning, August 2, confirmed 3,201 fresh Covid-19 cases, including three imported cases and 3,198 domestic ones in 20 provinces and cities, taking the country’s tally to 157.507.

Among the domestic cases, HCMC alone recorded 1,997 infections. Over the past 10 days, this is the first time the city has seen the number of cases reported in the morning fewer than 2,000. The city’s Covid-19 count in the fourth wave of Covid-19, which began in late April, has reached 96,292.

In addition, 496 infections were detected in Binh Duong Province, 189 in Dong Nai, 119 in Can Tho, 79 in Tien Giang and 76 in Danang, while Vinh Long, Binh Thuan, Hanoi, An Giang, Kien Giang, Binh Dinh, Ninh Binh, Dong Thap and Dak Nong reported 10-50 cases each. The remaining cases were found in Nghe An, Thanh Hoa, Ha Tinh, Lam Dong and Gia Lai.

The latest domestic cases have raised the country’s caseload in the current fourth wave to 153,672, with over 40,300 Covid-19 patients having been discharged from hospitals.

Over 209,150 doses of Covid-19 vaccines were administered on August 1, taking the total number of doses given to people in Vietnam to over 6.4 million.

Due to the complicated development of Covid-19, the Hanoi government last night issued an urgent telegram ordering districts and municipal departments to adopt stricter anti-virus measures.

The municipal government asked anti-virus forces to quickly conduct contact tracing, speed up Covid-19 testing, quarantine and monitor people returning from virus-hit areas and lock down areas with a high risk of infection.

Besides, residents are banned from leaving their home, except for special cases, while the governments of districts were told to support households during the shelter-in-place period by providing the poor or people at areas under lockdown with food.

The municipal government also asked the Hanoi Department of Health to work with the relevant agencies to map out a plan treating 20,000 Covid-19 patients for the worst-case scenario and report it to the Hanoi government before August 5.

In another development, Deputy Prime Minister Le Minh Khai has signed a decision earmarking VND5.1 trillion from the backup State budget for 2021 to buy medical equipment for the fight against Covid-19.