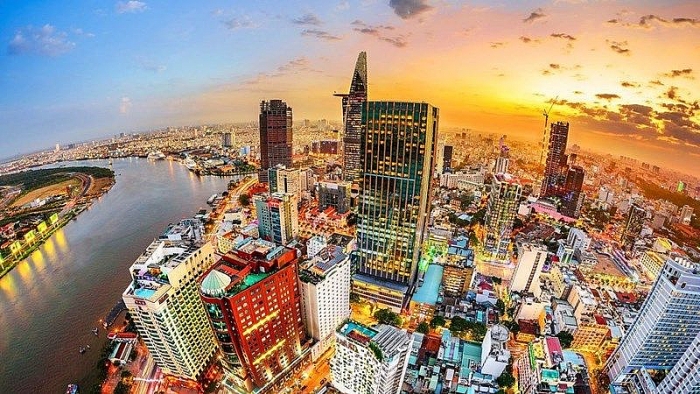 Vietnam is becoming more attractive during the current global pandemic climate, and therefore, its economic outlook is positive in long term.

Dau Anh Tuan, director of the Legal Department under the Vietnam Chamber of Commerce and Industry (VCCI), gave his view in a conference held on July 29 on the Vietnamese economy prospects in the final months of 2021.

“The pandemic makes many multinationals realize that they should not focus on a certain country, sector or location as an outbreak would disrupt the entire production chain,” Tuan said.

Tuan expected there would be a global shift in investment from one country to another, in which Vietnam would emerge as an attractive destination as it has been a part of a series of free trade agreements (FTAs).

Related: How to register a foreign owned business in Vietnam.

Another factor taken from the pandemic is that it has accelerated the digital transformation process in Vietnam, seen as key for Vietnamese firms to soon catch up with their international peers, Tuan said.

“Vietnam has taken a huge step in digitalization. The local business community with the majority being new, small, and medium-size so they could adopt new technologies easily,” he added.

According to Tuan, the current pandemic has also changed the view of local enterprises on the issue of corporate governance and is expected to compel them to improve efficiency in this regard.

“There could be another natural disaster or pandemic in the future, so higher capability in governance would help them better adapt to risks,” Tuan stated.

On measures to support businesses, Tuan said the majority of government’s aid packages were provided so far on the assumption that the pandemic would end around the second quarter, without contemplating the fourth outbreak as like the current one. Thus, more are expected to come, he stated.

“The pandemic is causing unprecedented difficulties, so supporting packages should also have to be unprecedented,” Tuan suggested.

The government has already mapped out mid-and long-term solutions for economic recovery, but how enterprises could survive until this point is another story, Tuan continued.

“Measures such as vaccine passport should be considered to support enterprises in the immediate future,” he argued.

Tuan stressed the pace of the vaccination program, its fairness, and transparency is the issue that the government should focus on, as he said private firms have not been able to access vaccines as much as state firms at the moment.

Based on the economic performance in the first six months and uncertainties ahead, economist Can Van Luc said the economy could reach a GDP growth of 5.3-5.5% this year, which is much lower than the target set by the National Assembly at 6%.

“There is no way but to soon control the pandemic and speed up the vaccination program,” Luc said.

Luc also expressed concern about the risk of price bubbles with the recent overheating real estate and stock markets.

“From now on until year-end, the global economic recovery would continue to support Vietnam’s exports. On the domestic front, greater efficiency in the vaccination program in the third quarter would be essential for the economy to recover in the fourth,” he concluded.