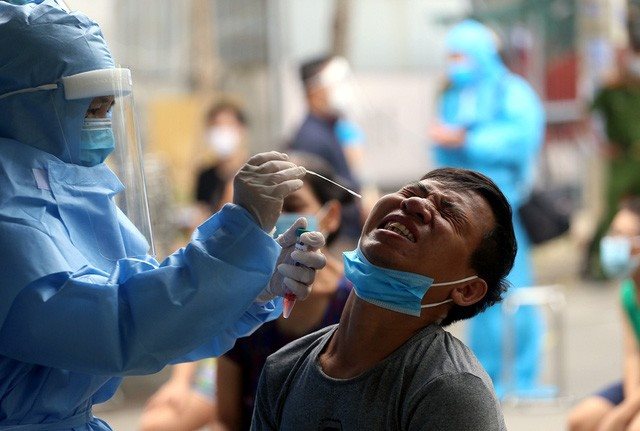 A local man has his samples collected by a medical worker for Covid-19 testinh. The Ministry of Health reported 3,227 new Covid-19 infections this evening, July 22 – PHOTO: VNA

HCMC – The Ministry of Health reported 3,227 new Covid-19 infections this evening, July 22, including 3,199 locally-infected cases in 28 provinces and cities and 28 imported cases.

Of the domestic infections, there are 819 cases whose source of transmission is unknown.

HCMC as usual in this fourth wave reported the highest number of cases at 1,785. The three neighboring provinces of Binh Duong, Dong Nai, and Long An recorded 615, 157, and 199 cases, respectively. The Mekong Delta province of Dong Thap had 117 cases, while the rest were found in 23 other localities nationwide.

Overall, the country reported the single-day spike of 6,194 cases, including 30 imported cases and 6,164 domestic cases that were mainly detected in HCMC with 4,218 cases, Binh Duong with 679 cases, and Long An with 432 cases.

Also, 1,450 coronavirus patients were declared free of the virus and were discharged from hospital on the same day, bringing the country’s total recoveries to 13,421 cases.

In a related development, the central province of Phu Yen has decided to implement the 15-day stay-at-home mandate under the prime minister’s Directive 16 starting from tomorrow.

The decision came after the pandemic spread to nine localities in the province for nearly a month, with nearly 1,000 cases reported.

Tran Huu The, the provincial chairman who signed an urgent dispatch this afternoon ordering the implementation of the shelter-in-place mandate, asked the entire population to strictly practice social distancing measures.

He required chairpersons of districts and towns and the heads of competent agencies to closely monitor the compliance with the stay-at-home order in their areas and to ensure the sufficient supply of food and essential items for local residents, especially the poor and those being furloughed due to the impact of the pandemic.

Also, they were told to ensure social safety and security, the hassle-free production and transport of goods during the stay-at-home period.

According to the provincial government, the pandemic continues to rage in the province. Since June 23, the province has reported nearly 1,000 infections and six fatalities linked to the virus. Also, new infections and deaths are forecast to rise in the upcoming period.