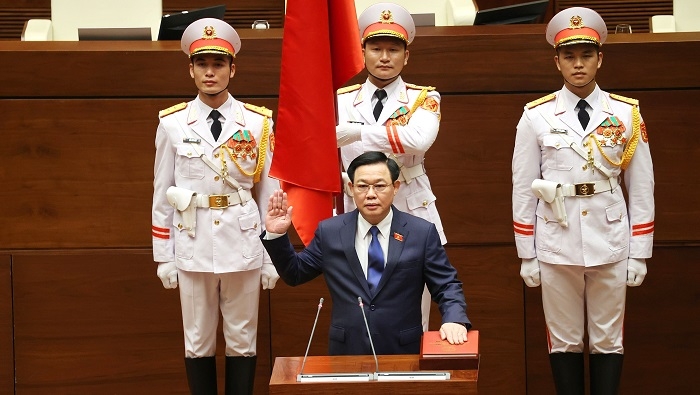 NDO – Politburo member Vuong Dinh Hue was sworn in as new Chairman of the new National Assembly (NA) during the 15th NA’s first session held in Hanoi on July 20.

This afternoon, the NA elected Hue, the 14th NA chairman, to the top legislator position for the 15th term. Immediately after being elected, NA Chairman Hue performed the swearing-in ceremony.

At the first session, NA deputies voted to approve a resolution to elect the new chairperson, with all 475 delegates present cast their votes (out of the total 499 deputies), accounting for 95.19%.

Earlier, in the morning session, the Standing Committee of the 14th NA presented the nomination for Hue for the NA to elect to the position of chairperson of the 15th NA.

This afternoon, the deputies discussed at their delegation about the expected personnel for the election of the chairperson of the 15th NA.

The 14th NA Standing Committee then reported the results of the discussion to the 15 NA for further discussion and vote to elect the chairperson of the 15th NA by secret ballot.

After that, the NA discussed and voted to approve the resolution to elect the NA chairperson by an e-voting system.

“In front of the sacred red flag with yellow star, the NA, and fellow voters nationwide, I am, the Chairman of the National Assembly of the Socialist Republic of Vietnam, sworn to: Absolutely loyal to the Fatherland, the people and the Constitution of the Socialist Republic of Vietnam, striving to fulfil well the tasks assigned by the Party, State and people,” new NA Chairman Hue took his oath.

Hue also expressed his sincere thanks to the NA for trusting him to be elected to the position in the new term. He then delivered his inauguration speech.