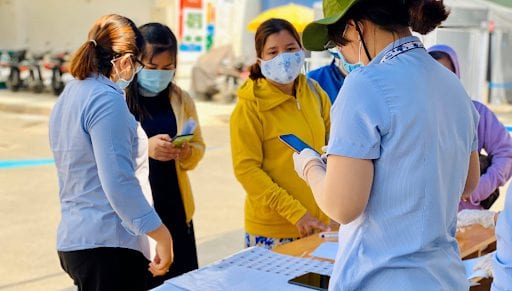 Its neighbor Binh Duong Province recorded 215 cases, including 123 in quarantined and isolated areas and 92 with unclear sources of transmission.

Dong Nai Province that also borders HCMC got 74 cases, with 33 having been isolated, 32 linked to a cluster at a company in Vinh Cuu District, and nine being contact traced.

Among other southern localities, the Mekong Delta’s Vinh Long Province registered 41 cases, and 30 are linked to a cluster at a company in Long Ho District and 11 have unknown infection sources.

Ben Tre Province reported 30 cases, including 20 linked to previously confirmed patients, three associated with a market in Ward 5, Ben Tre Town, one returning from HCMC and the authorities are tracking down the source of transmission for the remaining six.

Ba Ria-Vung Tau Province detected 17 cases, with five related to previous patients, 10 in areas under lockdown and quarantine zones, one returning from HCMC, and one with unknown transmission source.

Dong Thap Province got six cases: five in quarantine and one with unclear transmission sources.

Hau Giang Province reported two cases, with one linked to an existing patient and one returning from Can Tho.

The entire southern region will be under strict social distancing from Monday, with people required to stay at home and only go out for buying food, medicine or to work in businesses and offices allowed to open.

Quang Ngai Province reported 14 cases that have all been isolated prior to their test results.

Quang Nam Province recorded two cases, one linked to a confirmed patient and one being contact traced.

In northern Vietnam, Hanoi recorded 12 cases, with 11 linked to existing cases and one returning from HCMC.

Bac Ninh Province got three cases, one in quarantine and two returning from HCMC.

Vinh Phuc and Lao Cai provinces reported two cases each, Thai Binh one, and they are all people returning from HCMC.

So far in the fourth wave which started in late April, Vietnam has recorded 52,164 cases in 58 of its 63 cities and provinces.

HCMC is leading the case count with 32,926 infections.

More than 4.28 million of the nation’s 96 million have been vaccinated against the new coronavirus and 306,475 have got two doses.