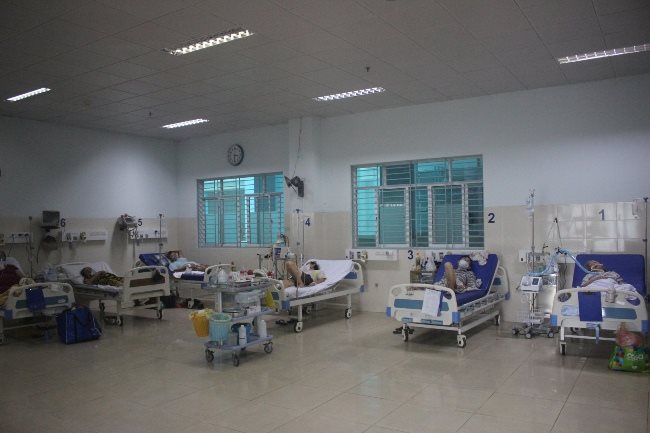 Of the locally transmitted cases, 1,769 were reported in HCMC, sending its total number of infections in the fourth Covid-19 wave to 25,682.

Some other southern provinces also reported a large number of new patients, such as Binh Duong with 124 cases, Dong Nai with 43, Vinh Long with 42, Dong Thap with 41 and Ben Tre with 34.

Besides, the Ministry of Health confirmed 22 cases in Khanh Hoa, seven in Binh Phuoc, six in Soc Trang, four in Can Tho and three in An Giang. Hanoi, Bac Ninh and Binh Dinh detected two new cases each, while Phu Yen, Lam Dong, Dak Nong and Gia Lai had one each.

The imported case in a woman residing in An Phu District, An Giang Province. She returned to the country through the Vinh Xuong International Border Gate on June 26.

The country has reported 42,663 domestic infections in 58 cities and provinces in the fourth wave of Covid-19, which began in late April.

In HCMC, which is currently the country’s Covid-19 epicenter, some 220,000 people, mostly street vendors and garbage collectors, have received a total of VND330 billion from the city’s Covid-19 relief package.

The city is home to around 231,000 informal workers. Following the financial package worth VND886 billion that the city approved last month, each informal worker is given VND1.5 million.

According to Le Minh Tan, director of the HCMC Department of Labor, Invalids and Social Affairs, among 21 districts and Thu Duc City, four districts – 10, Binh Tan, Phu Nhuan and Nha Be – have finished handing over the money to all informal workers in their areas.

The remaining 11,000 informal workers in the city, who are now quarantined, stuck in areas under lockdown, or have returned to their hometowns, will receive the money later.

The city will also provide relief for some 80,000 contract workers who have had to stop working or lost their jobs as well as 60,000 vendors at traditional markets and 10,000 business households that have been forced to suspend operations.

The beneficiaries also include those unable to work as they have been sent to quarantine centers and people joining the frontline forces in the Covid-19 fight.

This is the second relief package of the city to support people affected by the pandemic. The first package worth VND587 billion was released last year, benefiting over 536,000 people.