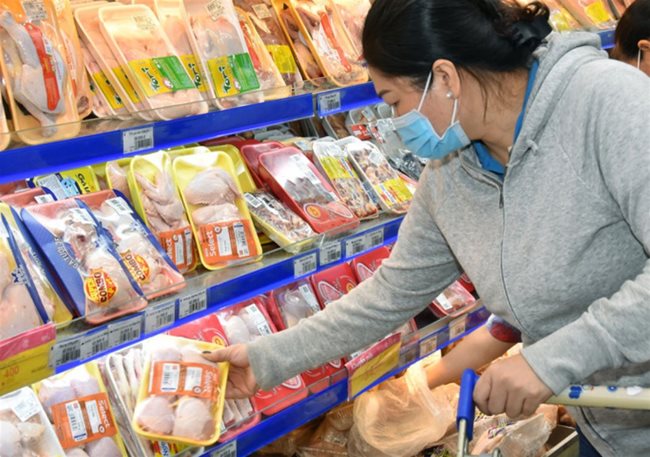 A woman inspects food at a supermarket in HCMC. The HCMC Department of Industry and Trade has worked with firms, postal and delivery companies and logistics service providers to open new 1,000 points of sale for food - PHOTO: NLDO

HCMC - The HCMC Department of Industry and Trade has worked with firms, postal and delivery companies and logistics service providers to open 1,000 new points of food sale to serve residents during the stay-at-home mandate as too many customers have overwhelmed the supermarket chains.

Since the HCMC government issued the shelter-in-place order on July 9 due to the fast spread of the Delta variant of the coronavirus, just one-fourth of 234 traditional wet markets citywide have remain operational, putting huge pressure on the supermarkets which now can meet around 30% of the city's consumer goods demand.

The municipal department also worked with Thu Duc City and Hoc Mon District to turn the areas near the wholesale markets there into food transshipment points, the local media reported.

Besides, vendors of the wholesale markets have been told to sell food online and deliver food to many parts of the city.

Speaking at a teleconference with the HCMC government on July 15, Bui Ta Hoang Vu, director of the Department of Industry and Trade, said that before the social distancing order under the prime ministerial Directive 16 came out, the residents had consumed some 7,000 tons of food a day.

However, the recent suspension of one-on-one transactions at the city’s three largest wholesale markets has disrupted food supply in the city as a mere 2,200 tons of vegetables and fruits have been supplied from these wholesale markets, down 50% against the figure seen before.

In addition, the Department of Industry and Trade has called on supermarkets to triple their food supply to 3,430 tons per day, while corporate participants in the price stabilization program have ramped up their supply of food from 1,069 on July 9 to 1,310 tons per day to date, said Vu.

Compared with the residents’ previous demand for food, the city is lacking some 1,000 tons of vegetables and fruits for consumption each day.

After the department encouraged more logistics companies and commercial and service firms to support food supply, 300 more tons of food have been added to the city each day since July 14.

To raise the food supply, the department has called on several ecommerce platforms such as Tiki, Lazada and Sendo to sell vegetables and fruits.

Apart from this, the Con Cung store chain with 150 stores; Guardian, a health and beauty products retail store chain, with 665 stores; and the Vinshop system today, July 16, started to sell vegetables, fruits and frozen food to help ease the overload facing grocery stores.