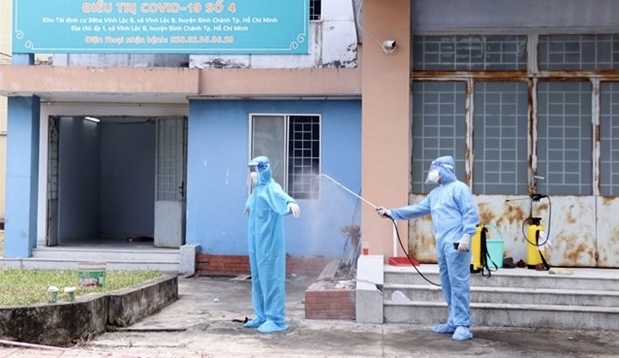 Medical workers are disinfected after their shift in HCM City (Photo: VNA)

NDO/VNA – The Ministry of Health on July 14 afternoon announced three COVID-19-related fatalities, raising the number of deaths in Vietnam to 135.

The three were elderly with serious underlying diseases.

The first was patient No 21842, an 87-year-old woman living in District 8, Ho Chi Minh City. She suffered from hypertension and senility. She tested positive for SARS-CoV-2 on July 4 and was treated at the Ho Chi Minh City Hospital for Tropical Diseases.

She died on July 10 and the cause of death was recorded as acute myocardial infarction, septic shock, severe pneumonia caused by SARS-CoV-2 infection in hypertensive patients and old age.

The second was also from Ho Chi Minh City. Patient No 27272 was a 67-year-old man. He suffered from cerebrovascular accident, chronic arthritis requiring medical treatment.

He lived with his son who was positive for COVID-19. From June 17 to 27, he had a high fever, cough, and difficult breathing. He was quarantined for treatment at the Binh Chanh district health centre and tested positive for SARS-CoV-2. On June 27, he was transferred to the Ho Chi Minh City Hospital for Tropical Diseases.

He died on July 10, with cause of death recorded as septic shock, skin infection, severe pneumonia due to SARS-CoV-2 infection, multi-organ failure in patients with cerebrovascular accidents and chronic arthritis.

On June 28-29, she developed a fever and cough, was admitted to the Binh Thanh Hospital, tested positive for SARS-CoV-2 and was transferred to the Ho Chi Minh City Hospital for Tropical Diseases.

She passed away on July 12, with cause of death recorded as septic shock, severe pneumonia caused by SARS-CoV-2 infection in patients with hypertension, senility and myocardial infarction.