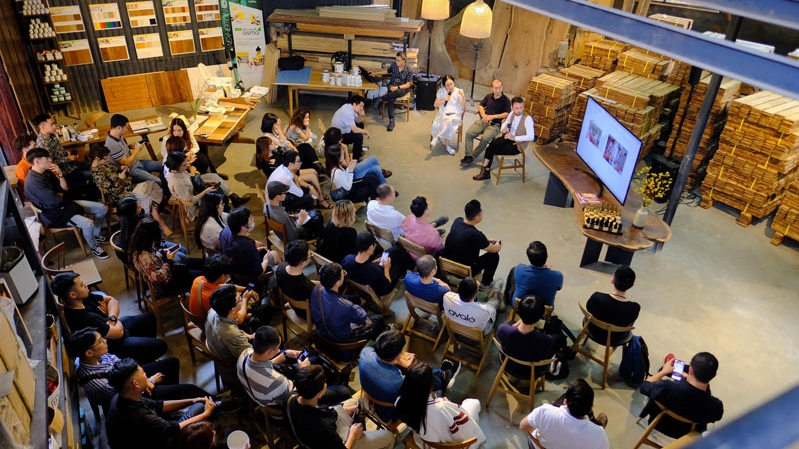 An activity at the 282 Workshop. (Photo from Workshop's page)

NDO - Old factories are an unforgettable part of Hanoi's memory. Relocating these factories out of the inner city was the right decision, helping people have a safer living environment. However, how to deal correctly with this industrial heritage needs to be carefully considered, both to ensure the development of the city and preserve their memory.

The 282 Workshop (at No. 156 Phu Vien street, Bo De ward, Long Bien district, Hanoi) is a multi-functional creative space, which includes a Playing Space, Production Space, Exhibition Space, Interaction Space and Workshop Space. At the 282 Workshop, children can play, while book lovers have a library of art and architecture books to investigate. Meanwhile artists can organise exhibitions and talkshows and students can organise workshops on pottery and wood.

Few people know that, before there was a quiet, green and beautiful space on an area of 3,200 square metres, the place used to be a wasteland, full of the garbage and pollution of the old factory. Some traces of the old factory are still present in the interior details of the Workshop. These make the 282 Workshop both a place to store memories and a place to incubate new creation. Although new, the 282 Workshop has managed to connect quite a few young people with the same passion for creativity and architecture. It has been trusted by some artists and community groups who organize cultural and artistic activities and exhibitions.

Born before the 282 Workshop, Complex 01 space (Tay Son, Hanoi) is also a new creative complex built on the foundation of an old printing factory. Located in a small alley, Complex 01 has a different look but is full of personality with its red brick walls and rusty metal stairs.

The banner of the old factory bears the slogan: "Colour printer No. 2 strives to exceed the output target of 35,000 sheets per shift" evoking memories. At Complex 01, a number of remarkable cultural activities took place, such as: an exhibition of toy models “In Imagined World I”; "Dream Concert" by Ru9 - The Sleep Company; seminar "Drama for the soul"; music night "Open Mic: Hanoi through the lens of young people" or art discovery tour "Art for You".

The rebirth of an old factory is the birth of a new creative cultural playground that meets and satisfies the needs of those who seek new value. In fact, Hanoi currently has more than 100 old factories with a fairly large area displaced from the inner city, such as: the Hanoi Brewery; Dien Thong Factory; a complex of three factories of Golden Star Rubber, Hanoi Soap and Thang Long Tobacco; Gia Lam Train Factory. Unfortunately, there are very few old factories that have been "reborn" in this way.

In the long term, this will be a sustainable direction, in line with Hanoi's goal of building a creative city.

In the world, there are many successful models of turning old factories into creative and profitable complexes. The 798 Art Zone, on the outskirts of Beijing, China is one such example. A factory complex with a total area of 60 hectares was built into an attractive art and cultural complex. Since its opening, the 789 Art Zone has attracted more than 75 million visitors and is the venue for large-scale national and international cultural events such as: the Beijing International Film Festival and Beijing Design Week.

Another example is the Songshan Cultural and Creative Park in Taipei, Taiwan (China). From the campus and buildings of the Matsuyama tobacco factory built by the Japanese in 1937, nowadays it has become an innovative multifunctional space. Accordingly, the Songshan Cultural and Creative Park includes a factory history museum, a design museum, commercial and service spaces for small and medium creative enterprises, exhibition spaces, and a public space.

Hanoi is a city with a rich tradition and a diverse industrial heritage. According to architect Mai Hung Trung, an original and traditional city is one that is constantly moving and transforming on the basis of what is already there. It is not a museum city. It is not a complete erasure or break with the past.

Converting an old factory into a creative space combining public cultural space will help Hanoi both mobilise, develop, connect and preserve memories. This is also a golden opportunity to develop infrastructure for the development of Hanoi's cultural industry as public spaces are one piece of the essential infrastructure of the industry of culture.

In addition, according to architecture experts, this transformation will both contribute to promoting the creative economy and be an effective way to preserve and promote the city’s industrial heritage. The success of the Vincom Centre for Contemporary Art (built on the foundations of the Tran Hung Dao Mechanical Factory) or the 282 Workshop and 01 Compex Tay Son are welcome signals, contributing to shaping the identity of a forward-looking creative city.