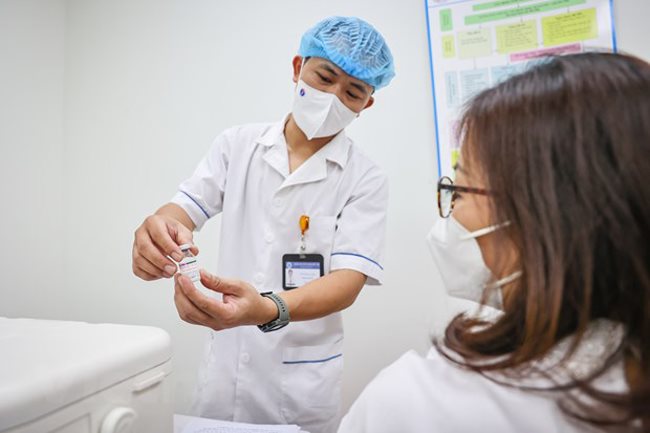 A medical worker shows a woman the Covid-19 vaccine before inoculation. The list of priority groups for Covid-19 vaccination has been expanded - PHOTO: VNA

HCMC - The list of priority groups for Covid-19 vaccinations has been expanded in the largest-ever inoculation campaign in Vietnam with 16 groups of people and four groups of provinces added.

Minister of Health Nguyen Thanh Long signed a decision launching the vaccination drive from now until April 2022. The plan will be executed based on the trajectory of the pandemic and the arrivals of vaccine supplies, and it will be the basis for agencies and provinces to build and conduct their inoculation plans, according to the ministry's Decision 3355/QD-BYT.

Besides the existing priority groups, including frontline workers in the fight against Covid-19 and the economic development, religious dignitaries and other groups approved by the Health Minister or chairpersons of provincial and municipal governments or proposed by vaccine suppliers will be prioritized.

The vaccination campaign will be conducted nationwide, prioritizing four groups of provinces and cities, including those currently struggling with the raging Covid and those in key economic zones or piloting the economic development plans of the Government.

In addition, cities and provinces home to many industrial parks and clusters, big numbers of workers and large populations, and those bordering other countries and having high travel frequency and international border gates will also be among the first beneficiaries.

The Ministry of Health has been making efforts to gain fast access to Covid-19 vaccine supplies via different channels. As a result, some 105 million doses have been secured for Vietnam.

The country is looking to vaccinate at least half the people aged from 18 against Covid-19 this year. By the end of the first quarter of next year, over 70% of the country’s population is expected to get vaccinated to achieve herd immunity.

To realize its target, Vietnam needs to hold a massive nationwide vaccination campaign with the participation of healthcare, military and police forces, ministries and agencies.