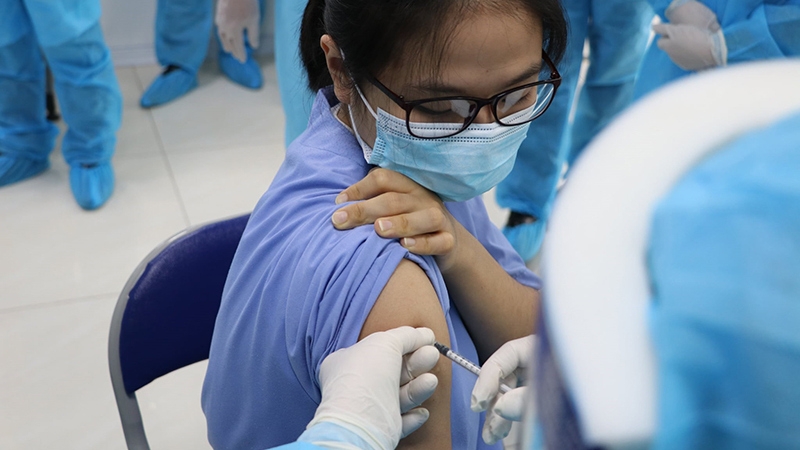 A woman gets inoculated against COVID-19. (Photo: Ministry of Health)

NDO/VNA – The list of groups given priority in COVID-19 vaccination has been expanded in the largest-ever immunisation campaign of Vietnam.

Minister of Health Nguyen Thanh Long has signed off a plan for implementing the national COVID-19 vaccination drive from now to April 2022.

The plan, taking effect on July 8, will be updated based on real-time pandemic developments and the vaccine supply, and it will serve as the basis for agencies and localities to make and carry out their inoculation plans.

According to the ministry’s implementation plan, aside from the existing priority groups, religious dignitaries, informal workers, and other groups decided by the Health Minister or chairpersons of provincial-level People’s Committees or proposed by vaccine suppliers will be prioritised for vaccination.

The campaign prioritises four groups of localities, including the ones currently having outbreaks and those located in key economic regions or piloting economic development projects of the Government.

Provinces and cities with many industrial parks and clusters, a big number of workers, and large populations, along with those boasting borderlines, high travel frequency, and international border gates will also be among the first beneficiaries.

The Ministry of Health has been making efforts to access sources of COVID-19 vaccine supply via different channels. As a result, about 105 million doses have been committed for Vietnam.

The country looks to have about 70% of the population inoculated to achieve herd immunity by late 2021 or early 2022.

To that end, it is necessary to engage various forces in the drive such as healthcare, military, and public security forces and to conduct vaccination simultaneously at vaccination establishments, both public and private ones, nationwide, the ministry said.

It targets that at least 50% of people aged 18 and above will be vaccinated against COVID-19 in 2021, and more than 70% of the population will get the shots by the end of the first quarter next year.