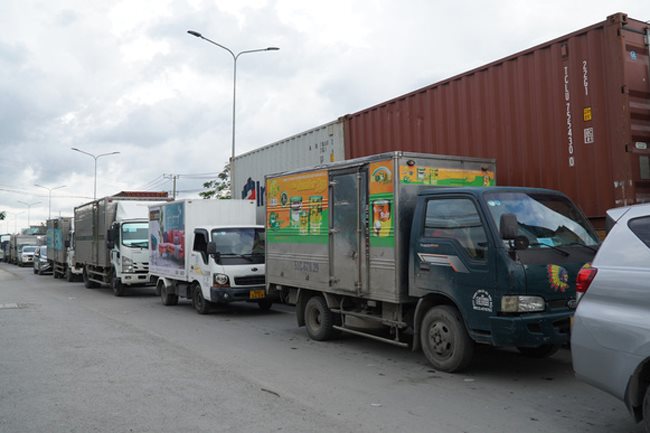 Traffic congestion is seen at a Covid-19 checkpoint at a gateway to Long An Province. Many other checkpoints have faced the same fate - PHOTO: NLDO

HCMC – A large number of people who tried to leave HCMC after the city began the lockdown under the prime minister’s Directive 16 have been asked to show negative Covid-19 test results by the competent agencies, causing heavy traffic congestion at Covid-19 checkpoints in the city’s gateway areas.

The HCMC government has reinstalled 12 Covid-19 checkpoints on roads connecting the city with its four neighboring provinces, the local media reported.

To pass through these checkpoints, residents must show proof of negative Covid-19 test.

This morning, thousands of vehicles were seen at a checkpoint on a National Highway 1 section from HCMC to Long An Province. They queued up in a 500-meter line to have their certificates checked.

Those without proof of negative Covid-19 test were asked to turn back.

At another checkpoint on National Highway 50, there were more than 10 medical workers, police officers and vigilantes. Many banners with requirements that people entering Long An Province’s Can Giuoc District must produce proof of negative Covid-19 test have also been hung.

At eastern gateways to Binh Duong and Dong Nai, the local authorities have enhanced forces to cope with the huge number of people leaving HCMC.

A BOT tollgate in Hoa An of Dong Nai’s Bien Hoa City on National Highway 1K has been converted into a checkpoint. A large volume of vehicles there caused traffic congestion on a 70-meter section of the highway.

An employee at the checkpoint said since yesterday afternoon, the number of vehicles from HCMC passing through the checkpoint has surged, mainly passenger cars and motorbikes traveling to Dong Nai, Binh Thuan, Nha Trang and Lam Dong. Most of them had negative Covid-19 test result.

At a meeting with the Bien Hoa City government on the fight against the Covid-19 pandemic, Dong Nai Chairman Cao Tien Dung said the number of people traveling from HCMC to Dong Nai today would be huge. Therefore, Covid-19 prevention and control groups in the community must be resumed immediately to detect those coming to the province from HCMC at the earliest to prevent the spread of the coronavirus.

Besides the 12 checkpoints reinstalled by the HCMC government, the city’s neighboring localities have also established other checkpoints.

At three other checkpoints on National Highway 51, there have been many people leaving HCMC for Ba Ria-Vung Tau Province. Those without proof of negative Covid-19 test will undergo quick tests at the checkpoints.

Police officers at the checkpoints will later contact the authorities of communes and wards in Ba Ria-Vung Tau and ask them to receive their residents and quarantine them at home for seven days.

The Ministry of Health yesterday, July 9, announced that people traveling from HCMC to 62 other localities must self-isolate for seven days from the day they arrive in the localities and undergo three Covid-19 tests on the first, third and sixth quarantine days.