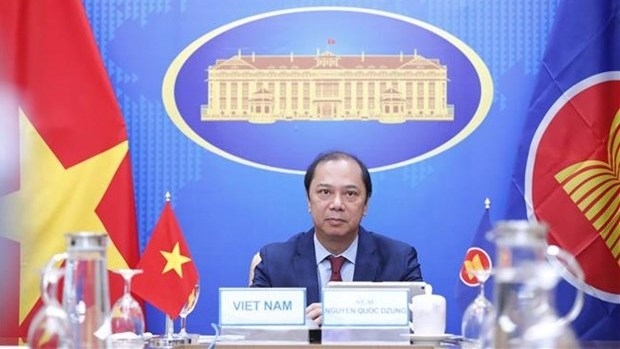 NDO/VNA – Vietnamese Deputy Minister of Foreign Affairs Nguyen Quoc Dung has asked the Republic of Korea (RoK) to continue helping ASEAN countries improve their medical capacity at the 25th ASEAN-RoK Dialogue at the deputy foreign ministerial level held in the form of teleconference on July 6.

Dung, who is also head of Vietnam’s ASEAN SOM, called on the RoK to coordinate in vaccine research and production, and ensure the fair supply of vaccines.

He appealed to the RoK to assist the ten-member group in promoting equitable and sustainable development in ASEAN’s sub-regions, including the Mekong.

Dung emphasised the need to maintain and boost multilateral cooperation, step up dialogues and trust building, uphold international law, and peacefully settle disputes, especially in the context of more and more emerging challenges, so as to ensure a peaceful, stable and favourable environment for development.

He affirmed that ASEAN supports the RoK’s efforts in promoting the peace process on the Korean Peninsula, calling on relevant sides to resume peace dialogues and make more contributions to gain peace, long-term stability and full denuclearisation on the peninsula.

Dung took the occasion to reiterate ASEAN’s principled stance on the East Sea/South China Sea, and expressed his hope that the RoK will continue to play a constructive role and support the bloc’s efforts to turn the East Sea into waters of peace, friendship and cooperation, as well as ASEAN's role in supporting Myanmar.

At the event, ASEAN and the RoK highlighted the positive developments in their cooperation, including their effective coordination in pandemic response and an increase of 9 percent year-on-year in trade that amounted to around 53 billion USD in the first four months of this year.

Deputy Foreign Minister Yeo Seung-bae, who is head of the RoK SOM, said the RoK attaches importance to the strategic partnership with ASEAN, noting the grouping is a priority in the country’s New Southern Policy Plus strategy.

The RoK backs ASEAN’s centrality in the regional architecture, as well as the ASEAN Outlook on the Indo-Pacific, he noted.

The RoK informed that it has contributed additional US$200 million to the COVAX Advance Market Commitment (COVAX AMC) and pledged to further assist ASEAN in the pandemic fight through implementing the US$10-million COVID-19 rapid response programme and establishing a dialogue channel between the two sides.

The two sides agreed to continue prioritising cooperation in the COVID-19 combat, and coordinate in mitigating the pandemic’s socio-economic impact for comprehensive recovery and sustainable growth.

The countries also stressed efforts for the early ratification and enforcement of the Regional Comprehensive Economic Partnership (RCEP) agreement.

Regarding regional and international issues of shared concern, the countries agreed on the need to maintain an environment of peace, security and stability to facilitate anti-pandemic and recovery efforts.

The RoK affirmed its support for ASEAN’s stance on the East Sea issue and lauded the grouping’s role in forging cooperation, dialogue and trust building in the region, and in building an effective and efficient Code of Conduct in the East Sea (COC) in accordance with international law and the 1982 United Nations Convention on the Law of the Sea (1982 UNCLOS).

As for the Myanmar situation, the RoK welcomed outcomes of the ASEAN Leaders’ Meeting on April 24, saying it backs ASEAN’s role in promoting dialogues and helping Myanmar seek solutions to stabilise the situation.