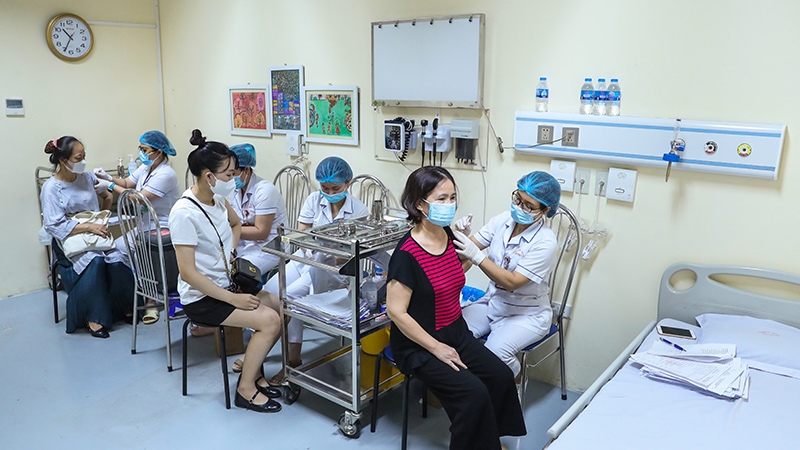 Therefore, from the end of 2020 and especially in the first quarter of 2021, countries ordered manufacturers to produce a large amount of vaccines. Thanks to early and large orders, the rate of COVID-19 vaccination in Europe and Americas is the highest in the world.

The percentage of people who have received the full dose of Covid-19 vaccine (two doses) in Europe is 25.8% of the population, this rate in Northern America is 32.87%, while in Asia it is 8.22%. In the ASEAN region, Singapore has the highest rate of full-dose injection at 35.8%, followed by Cambodia at 18.24%, 8 out of the 10 remaining countries with a rate not exceeding 8%.

The question is if the countries that ordered early receive enough vaccines, what is their real need? How many doses of vaccine will they have left over, and not used this year?

If it is estimated that in 2021, the 32 countries with the largest vaccine hoard will have enough vaccinations for 70% of their population (two doses per person) and two doses per person in reserve for 2022, meaning that each person can be guaranteed four doses in 2021. Thus, they will need 3.003 billion doses, while they have ordered 5.012 billion doses. That is, with the total population of these 32 countries at 1.036 billion people, they cannot use all of the 5.012 billion doses, but will have 2.009 billion left over.

Vietnam is facing its fourth wave of the COVID-19 epidemic. Although it has not yet reached the peak, this is the longest and heaviest wave so far. In the context of the Covid-19 pandemic continuing to be complicated, in order to achieve herd immunity, it is necessary to use vaccines to strongly and quickly prevent infection in the six current hotspots, then in 45 provinces and cities where the epidemic is spreading, and finally in the 12 localities without epidemic.

With the goal of vaccinating about 70 million people, it is necessary to inject 68.32 million people, with a total of 136.64 million doses (two doses per person). To date, Vietnam has signed contracts with partners to buy or supply Vietnam with 110 million doses of vaccines, but most of these producers will not be sanctioned if they do not deliver at the scheduled delivery time as stated in the contract.

Thus, the problem is how to get about 100 million vaccine doses in the next two to four months, and 30 million more doses in the last two months of the year, to achieve the goal of vaccinating 70 % of the population, achieving herd immunity. From current practice, it is necessary to find a vaccine source that can be purchased quickly or swapped, and then return them a new vaccine ordered delivered later. Through the above analysis, the real demand of 32 countries, which have ordered 5.012 billion doses for 2021 (including reserves for 2022), is only 3.003 billion doses; a 2.009 billion dose excess.

Therefore, if Vietnam negotiates with the leaders of the EU (27 countries) and the governments of the UK, the US, Canada, Australia and Japan to buy back or swap new vaccines , we can quickly get about 100 to 130 million doses. The EU and these five countries both have a comprehensive cooperative partnership or strategic partnership with Vietnam. The acquisition or partial swap of the vaccine would be considered beneficial for both parties.