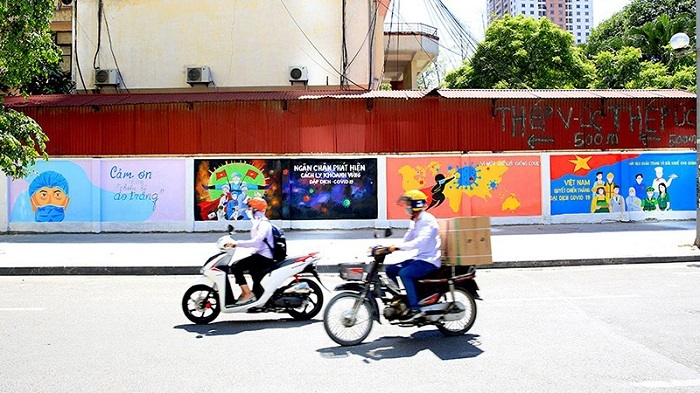 NDO – Since the COVID-19 pandemic appeared and broke out globally, in many major cities around the world, artwork in diverse forms from mural paintings and graffiti have been created at public spaces, reflecting the danger of the pandemic while celebrating the beauty of life.

In Hanoi, a mural painting on the prevention and control of COVID-19 was recently unveiled in late June by members of the Ha Dong District youth union, delivering a strong message to viewers. The 200-meter-long mural was painted along a wall at Vu Trong Khanh Street, Ha Dong District, featuring images of doctors and, medical staff taking care of patients, as well as people wearing masks and washing hands to repel SARS-CoV-2 virus.

Previously, members of the Hai Ba Trung district Association of War Veterans performed a makeover on electricity boxes in Bach Mai and Le Thanh Nghi streets with colourful and eye catching propaganda paintings, which convey meaningful messages such as “Thank you, white-blouse soldiers!”, “Wear a mask when outside”, “Wear a mask to protect yourself”, “Determined to drive back Coronavirus”, “We stayed at work for you. You stay at home for us”.

The selected electric boxes are located on routes with high traffic volumes so that the paintings can bring a new look to the streets while conveying disease prevention and control messages in a practical way. The paintings are presented in bright colors with easy-to-understand content while delivering positive and encouraging messages. Through the artwork, viewers can partly understand the hardship and stress facing the frontline forces working ceaselessly to fight against the pandemic and bring life back to normality.

The Ministry of Health’s 5K message: khau trang (facemask), khu khuan (disinfection), khoang cach (distance), khong tu tap (no gathering) and khai bao y te (health declaration) is also highlighted in the artwork to raise public awareness of protecting the health of themselves and of the community.

Currently, many other posters and paintings on pandemic prevention and control have been put up at public spaces across districts in Hanoi, including Thach Ban Primary School in Long Bien District, Phu Xa Street in Tay Ho District, and Truong Yen Commune People's Committee in Chuong My District.

Besides murals, graffiti, a visual art form which sees much interest from the youth, has also been ultilised in the fight against COVID-19.

Since early 2020 when the pandemic first broke out in Vietnam, graffiti artist Le Long and his colleagues have produced a number of works at several locations in Hanoi, calling for joint efforts to dispel COVID-19. Prominent among them is a villa in Van Phu Urban Area in Ha Dong District covered with impressive graffiti images about the green Earth, the “medical shield” against Coronavirus, and vaccines for COVID-19.

A representative of Hanoi’s Department of Culture and Sports said these initiatives are creative and effective ways to popularise information to the people while contributing to adding a nice touch to the city’s appearance. 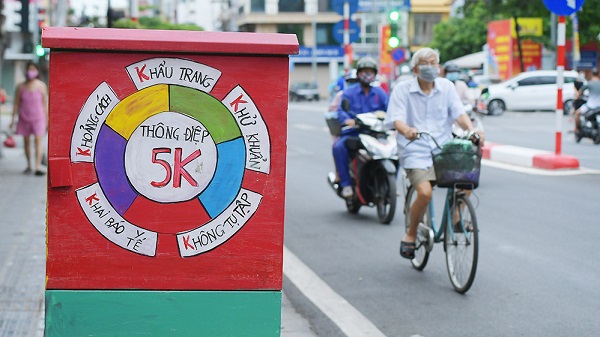 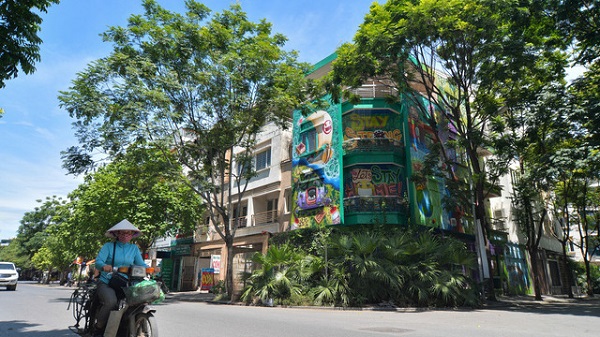 A villa in Van Phu Urban Area in Ha Dong District with graffiti paintings by artist Le Long and his colleagues. (Photo: toquoc.vn) 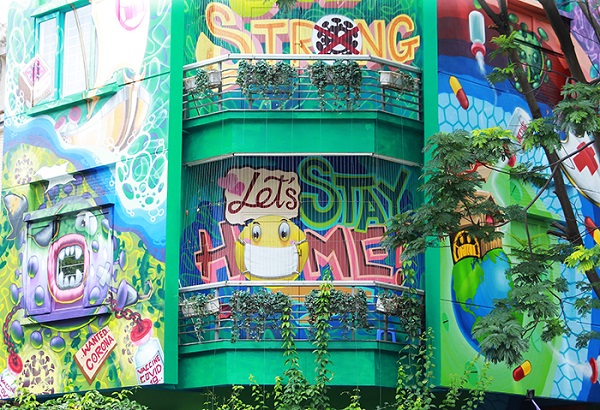 The graffiti delivers messages such as “Let’s stay home” and “Stay strong” to encourage people’s spirit amidst the pandemic. (Photo: hanoi.gov.vn)