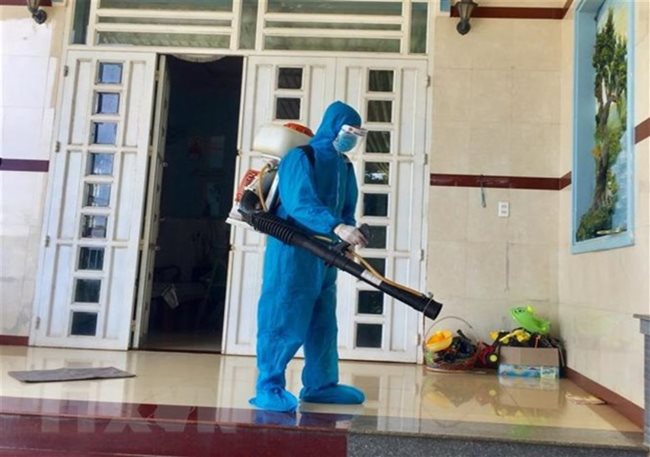 A medical worker sprays disinfectants to prevent the spread of Covid-19. Vietnam’s Covid-19 tally has risen to 20,261 after 328 new domestic Covid-19 infections were reported this morning, July 5 - PHOTO: VNA

HCMC - Vietnam’s Covid-19 tally has risen to 20,261 after 328 new domestic Covid-19 infections were reported this morning, July 5, with HCMC and Dong Thap detecting 175 and 100 cases, respectively.

Twenty-three other locally-infected cases were confirmed in Phu Yen, nine in Hung Yen, eight in Khanh Hoa, six in An Giang, two each in Long An and Bac Ninh and one each in Lang Son, Dong Nai and Soc Trang. As many as 272 cases were detected at quarantine centers or areas under lockdown.

The latest cases in HCMC raised the city’s caseload to 6,209 in the current fourth Covid-19 wave, which began in late April, while with 100 new cases in Dong Thap, the province’s total number of infections reached 161.

Since April 27, the country has had 16,833 domestic cases in 55 provinces and cities, with 5,045 patients having made a full recovery.

The patient tested positive for Covid-19 and was admitted to the Binh Duong General Hospital on June 23. After 11 days of treatment efforts, the woman’s health condition got worse. At 12.20 p.m. on July 4, she died of septic shock, multi-organ failure, pneumonia caused by Covid-19 and heart failure.

In related news, Binh Phuoc Province has imposed an administrative fine on a real estate firm for organizing an event gathering many people violating Covid-19 infection prevention and control regulations.

The government of Dong Xoai City in Binh Phuoc Province on July 4 issued decisions fining the owner of the property firm VND15 million and over 100 individuals VND2 million each for gathering. Meanwhile, 13 other people were fined VND7.5 million each as they arrived in the province from virus-hit areas, but failed to make health declarations.

Up to 122 people participated in the event at the restaurant, with most of them living in Binh Phuoc Province and some others residing in Dong Nai and HCMC.

The competent forces asked the restaurant to suspend the event and prevent the people inside from leaving the restaurant for screening checks and quick tests.