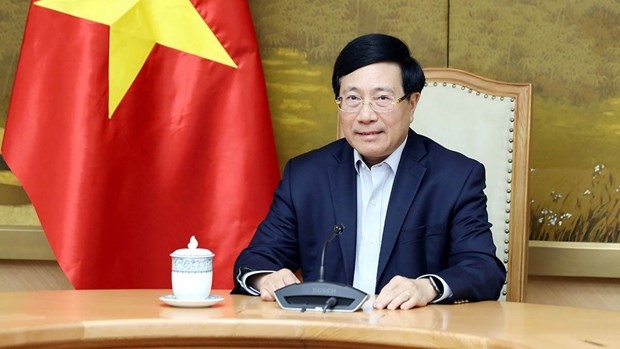 Both officials held that the Vietnam – US strategic partnership has been growing strongly in all fields, bringing practical benefits to the people of the two nations and making active contributions to maintaining peace, stability, cooperation and development in the Asia-Pacific region and the world at large.

They also agreed to enhance cooperation to further deepen bilateral ties via specific measures such as maintaining high-level communications and meetings, stepping up collaboration in fields of shared interest such as dealing with post-war consequences, science - technology, education - training and climate change response.

Minh highly valued the US’s role in promoting vaccine supplies for countries worldwide via the COVAX Facility as well as bilateral cooperation. He expected the US to continue supporting Vietnam's early access to vaccine supplies committed by the US.

The Deputy PM also suggested the US work closely with Vietnamese agencies to promote and ensure harmonious and sustainable development of bilateral economic, trade and investment ties.

Sullivan, for his part, affirmed that the US continues treasuring its comprehensive partnership with Vietnam.

Having spoken highly of Vietnam’s increasingly important role in the region and the world, Sullivan said the US will continue assisting Vietnam and other countries in accessing vaccines to push back the COVID-19 pandemic.

The US will work closely with Vietnam to enhance economic, trade and investment ties to bring benefits to businesses and people of both nations.

The two officials agreed to boost mutual coordination at global forums such as the United Nations Security Council to deal with common challenges.

They also discussed international and regional issues of shared concern such as the Greater Mekong Sub-region and response to climate change, and vowed to support ASEAN’s central role, freedom of navigation and settlement of disputes in the East Sea/South China Sea in line with international law, including the 1982 United Nations Convention on the Law of the Sea (UNCLOS).