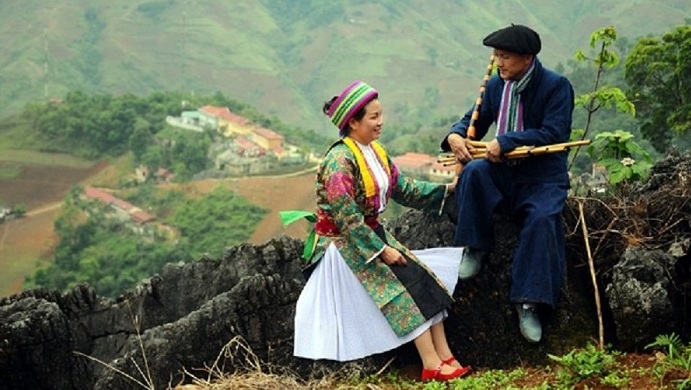 Khau Vai market is the meeting venue for couples who were in love but broke up in the end.

NDO – The social customs and beliefs of the Phong Luu Khau Vai Market in Khau Vai commune, Meo Vac district, Ha Giang province have been recognised as a national intangible cultural heritage by the Ministry of Culture, Sports and Tourism.

The market, also known as the Hang Phung Liu market, is held only once a year on the 27th day of the third lunar month. Believed to date back to more than 100 years, it is now a popular attraction for visitors and photographers in Ha Giang province.

What makes the market stand out from the others is that it is not a trading place for agricultural products or specialties as usual but instead is a meeting venue of couples who were in love but didn’t tie the knot, and broke up in the end.

On the day, local ethnic women and men dress in their most beautiful traditional costumes and go to the market where they are free to meet their exes in public, and their husbands and wives do not get angry or jealous because the meeting at the market is supposed to be a temporary moment and does not affect their daily lives or relationship.

The market is now organised within of the framework of the annual Khau Vai Culture and Tourism Week, which often lasts for three days with assorted cultural activities, in order to attract more visitors to Ha Giang province.