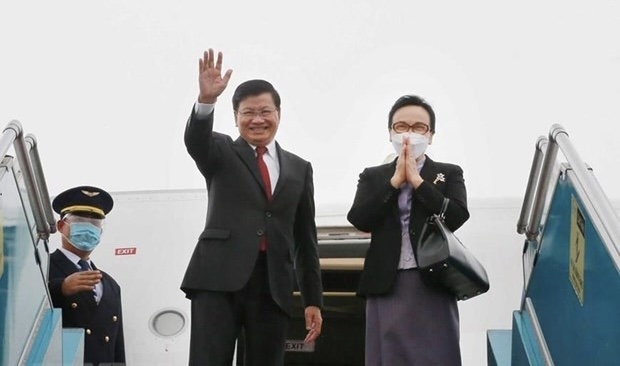 He received delegations from the Central Committee of the Vietnam Fatherland Front, the Vietnam – Laos Friendship Association and the Liaison Committee for former Vietnamese Volunteer Soldiers and Military Experts in Laos.

On the occasion, the Vietnam News Agency (VNA) partnered with the Party Central Committee’s Commission for External Relations and the HCMA to hold a photo exhibition featuring the great friendship, special solidarity and comprehensive partnership between Vietnam and Laos. On display were nearly 30 photos chosen from the VNA’s national photo archive.

The two sides issued a joint statement which affirms the great friendship, special solidarity and comprehensive partnership as an invaluable common asset of the two nations and a factor ensuring their national development. The two Parties, States and peoples will take responsibility for maintaining and fostering bilateral ties in various areas, upholding the spirit of independence, self-reliance, fair and mutually beneficial cooperation, and creating favourable conditions for prosperity of each country, and for sake of peace, stability, cooperation and development in Southeast Asia and the world.

They agreed to enhance the timely sharing of information and consultations, work closely and effectively together at regional and global forums, especially within the framework of ASEAN cooperation and ASEAN-led mechanisms, the United Nations, the Greater Mekong Sub-region, the World Trade Organisation and the Asia-Europe Meeting.

Both sides underscored the importance of maintaining peace, stability and ensuring security, maritime and aviation safety and freedom in the East Sea/South China Sea, as well as settling disputes in the East Sea by peaceful means in line with international law, including the 1982 United Nations Convention on the Law of the Sea.

The Lao leader invited Party General Secretary Trong, President Phuc and Vietnamese Party and State leaders to visit Laos. The Vietnamese leaders expressed their sincere thanks and accepted the invitation with pleasure.

Upon returning to Laos, Thongloun Sisoulith sent a letter to Party General Secretary Trong and President Phuc, thanking them and other Party and State leaders of Vietnam along with the Vietnamese people for their warm and respectful reception during the Lao leader’s visit to Vietnam.

Sisoutlith said he appreciated the results of his talks with the Vietnamese Party General Secretary, State President and senior leaders of the Party and State of Vietnam.

He affirmed his belief that the success of his official visit to Vietnam, as well as the exchanges between senior leaders of the two parties and two countries, will contribute to the traditional friendship as well as the special solidarity and comprehensive cooperation between the two parties, countries and peoples.