During their meeting in Hanoi, State President Phuc congratulated Thongloun on his election as General Secretary of the Lao People’s Revolutionary Party (LPRP) and President of Laos.

Thongloun’s selection of Vietnam for his first overseas trip after taking office demonstrates the importance the Lao Party and State attach to the great friendship, special solidarity and comprehensive cooperation between the two countries, helping to create new momentum for their close-knit, faithful and trusting ties, he said.

The Vietnamese President expressed his belief that the Lao people will successfully realise the Resolution adopted at the 11th National Congress of the LPRP and the 2021-2025 socio-economic development plan.

For his part, LPRP General Secretary and State President Thongloun congratulated Vietnam on the success of the 13th National Party Congress and the elections of deputies to the 15th National Assembly and all-level People’s Councils for 2021-2026.

He also lauded great achievements the Vietnamese people have recorded in the process of national construction and development, and international integration, which, he said, have served as a source of encouragement for the Lao revolutionary cause.

Reviewing mutual support in the COVID-19 combat, the two leaders pledged to continue their joint efforts to cope with the pandemic, soon recover socio-economic activities and promote sustainable development.

Thongloun said the great material and spiritual support of the Vietnamese Party, State and people have significantly contributed to Laos’s successes in pandemic containment over the past time. 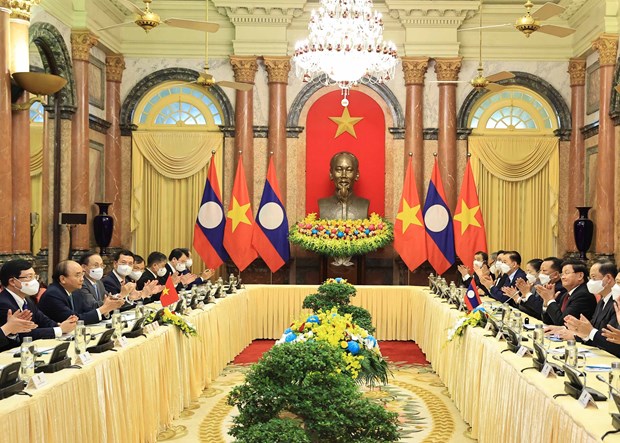 State President Phuc also appreciated the Lao side’s donation of US$300,000 to aid Vietnam’s COVID-19 fight, saying it reflects the fraternity between the two nations.

The two leaders expressed their delight to see the Vietnam-Laos relations thriving further despite impacts of COVID-19. Political ties have been consolidated as both sides have been striving to maintain high-level delegate exchanges and meetings, particularly after the successful organisation of the National Party Congresses and the election of new leaders in the two countries. These have contributed to help the countries find orientations and dynamics for bilateral cooperation in all areas in the new term.

They agreed to coordinate in organising celebrations of the 60th founding anniversary of diplomatic ties and the 45th year since the signing of the Vietnam-Laos Treaty of Amity and Cooperation next year.

On this occasion, host and guest discussed cooperation between the two nations at multilateral forums, especially the Association of Southeast Asian Nations (ASEAN) and Greater Mekong Sub-region, and collaboration among Vietnam, Laos and Cambodia.

The Vietnamese President congratulated Laos on being elected as Vice President of the 76th United Nations General Assembly (UNGA), reflecting the increasingly growing prestige and position of Laos on the international arena.

LPRP General Secretary and State President Thongloun invited State President Phuc and his spouse to pay a visit to Laos at an appropriate time. The Vietnamese leader accepted the invitation with pleasure.

The Lao leader and his entourage left Hanoi in the early afternoon of June 29, wrapping up their official friendship visit to Vietnam.