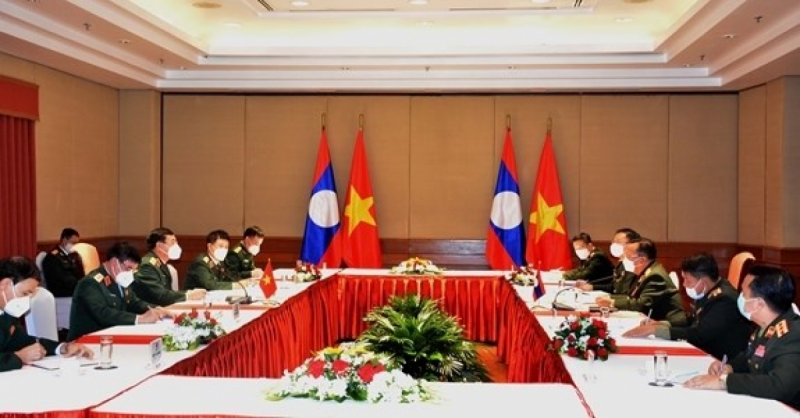 At the meeting (Photo: VNA)

During his meeting with Lao Deputy Prime Minister and Minister of National Defence Gen. Chansamone Chanyalath, Giang said the fight against COVID-19 is expected to continue developing complicatedly and suggested the two sides provide more mutual support to soon push back the pandemic.

Giang thanked the Lao Ministry of National Defence for its assistance to its Vietnamese counterpart in COVID-19 prevention and control.

Chansamone stressed that the Vietnamese and Lao Parties, States, armies and people always give wholehearted sentiments and support to each other in any circumstances.

He also thanked the Vietnamese ministry for its aid to Laos during the pandemic combat.

They agreed to make preparations for cooperative activities in the time ahead, including the exchange of delegations at all levels, and joint activities between the two armies, said VNA.

The two countries’ competent forces in border areas will continue their close coordination to contribute to preventing the spread of the pandemic as well as cross-border crime, they said.

Later the same day, Gen. Chansamone Chanyalath met with former Vietnamese Minister of National Defence Gen. Ngo Xuan Lich, during which the Lao official said the two armies have agreed to maintain their close cooperation to deserve the trust of the Vietnamese and Lao Parties and people.

On June 28, General Secretary of the Communist Party of Vietnam (CPV) Central Committee Nguyen Phu Trong and General Secretary of the Lao People’s Revolutionary Party (LPRP) Central Committee and President of Laos Thongloun Sisoulith made the affirmation during their talks in Hanoi, which took place following an official welcome ceremony for the Lao leader. 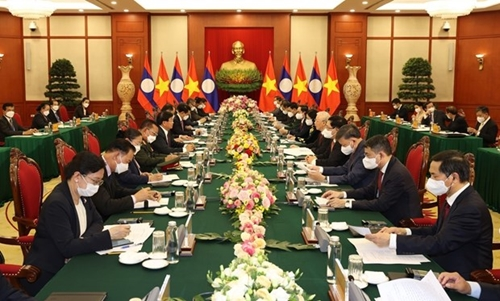 The Vietnamese leader said Thongloun Sisoulith’s visit will contribute to strengthening cooperation between the two Parties and countries, serving the cause of reform and national construction and defense in each country.

The two leaders also pledged to strengthen cooperation and coordination with each other and with relevant countries and international organizations to manage, develop, and use the Mekong River’s water sources sustainably and effectively.

They emphasized the importance of maintaining peace, security and stability as well as ensuring security, safety and freedom of navigation and aviation in the Bien Dong Sea, settling disputes in the sea by peaceful measures on the basis of international law, including the 1982 United Nations Convention on the Law of the Sea, and promoting the full and effective implementation of the Declaration on the Conduct of Parties in the East Sea (DOC) and working towards the formation of an effective and practical Code of Conduct in the South China Sea (COC), in accordance with international law.

The Lao leader invited the Vietnamese Party chief and his spouse to pay an official friendship visit to Laos. The latter accepted the invitation with pleasure and invited senior Party and State leaders of Laos to visit Vietnam.