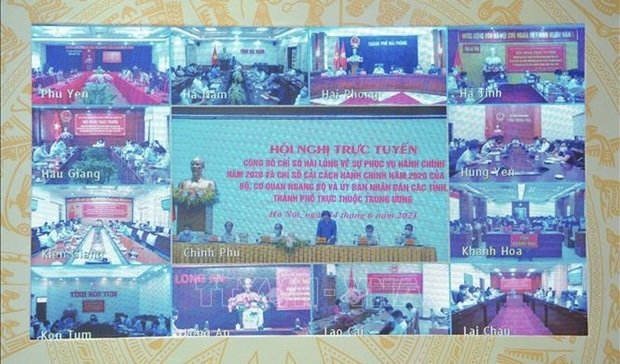 The teleconference to announce the 2020 PAR Index and SIPAS (Photo: VNA)

The index assesses the administrative reform level of provinces and cities, as well as ministries, and ministerial-level agencies.

Among ministries, and ministerial-level agencies, the State Bank of Vietnam ranked first with a result of 95.88%. It was followed by the Ministry of Finance and the Ministry of Justice.

Meanwhile, Quang Ninh led the country's 63 provinces and cities with 91.04%, followed by the northern port city of Hai Phong city and the central province of Thua Thien-Hue.

Among six economic zones, the Southeast Economic Zone recorded the highest PAR Index in 2020, with 85.88%.

In terms of the 2020 Satisfaction Index of Public Administration Services (SIPAS), which assesses the performance of public services in 16 fields in 63 provinces and cities from citizens' perspectives, Quang Ninh continued to stay atop at 95.76%, followed by Hai Phong (93.57%), Bac Giang (92.54%), and Hai Duong (92.2%).

From over 35,000 respondents in the survey, 5% of them said they were forced to visit public agencies several times to complete an administrative procedure.

Meanwhile, 1.23% of the surveyed people in 57 provinces and cities revealed they were troubled by public servants in the process of realising the procedures, 0.59% had to pay the under-the-table fees, and 4% received the answer for the application behind schedule.