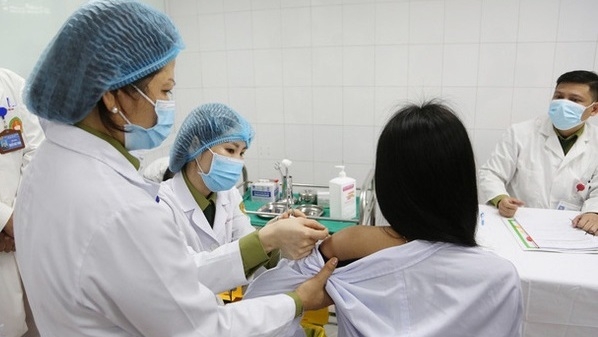 NDO/VNA – The administration of the first 1,000 shots in the third-phase trials of Nano Covax, a home-grown COVID-19 vaccine candidate, has completed, the Hanoi-based Vietnam Military Medical University said.

The jabs were given to about 880 volunteers in the northern region under the university’s coordination and more than 120 others in the south under the coordination of the Pasteur Institute in Ho Chi Minh City.

The shots were administered on a 6:1 ratio, which meant six got the vaccine and one received placebo, according to Lt. Col. Chu Van Men, Director of the university’s Centre for Clinical Trials and Bioequivalence.

The volunteers will have blood samples taken to test the generation of immunity by July 30, and data about the vaccine safety and immunity generation are set to be available by mid-September.

After the first 1,000 volunteers, the trials of Nano Covax will continue on another 12,000 on a 2:1 ratio, with two getting the vaccine and one the placebo.

The third-phase trials, using only the 25mcg doses, cover 13,000 volunteers aged between 18 and 75 nationwide.

Nano Covax has been developed by the Nanogen Pharmaceutical Biotechnology JSC since May 2020. The first-phase trials began on December 18, 2020 while the second phase on February 26 this year, and the third on June 11.

Vietnam also has several other vaccine candidates under development.