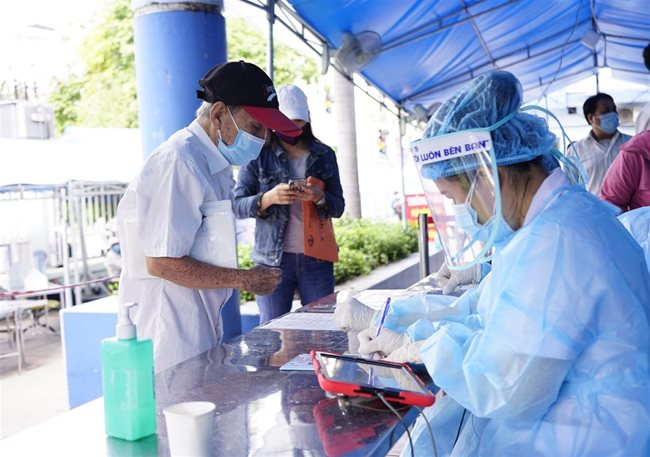 HCMC - The Ministry of Health confirmed 46 new community-transmitted Covid-19 cases, including 33 in HCMC, this morning, June 21.

Besides, five new cases were detected in Bac Giang, four in Bac Ninh and two in Tien Giang. Nghe An and Tra Vinh had one new case each.

Hai Duong reported one imported case who returned to Vietnam from France on Flight VN18 on June 19.

Up to now, the country has recorded 13,258 Covid-19 cases, including 9,990 domestic infections in 42 cities and provinces during the fourth Covid-19 wave since April 27.

Bac Giang remains the country’s biggest Covid-19 hotspot at present with 5,411 patients, followed by HCMC with 1,651 and Bac Ninh with 1,529. Tra Vinh reported the first Covid-19 case after half a month.

Vietnam has given over 2.4 million Covid-19 vaccine shots to the people. Among them, nearly 121,700 have received two shots.

Addressing a meeting on June 19, deputy director of the HCMC Department of Information and Communications Tu Luong said the Covid-19 pandemic is developing complicatedly in the city, with the number of new cases surging recently. Therefore, the city government has decided to tighten Covid-19 infection prevention and control measures.

The city has temporarily suspended makeshift markets and public transport and banned gatherings of more than two persons in public places.

The people are asked to stay at home and only go out when it’s really necessary such as buying food, working for factories or other emergency cases, while companies are encouraged to restrict direct contacts and allow employees to work from home.

In Binh Duong Province, a neighbor of HCMC, the entire Binh Chuan Ward and some areas of An Phu and Binh Hoa wards have implemented social distancing measures in line with the prime minister’s Directive 16. All nonessential services have been suspended, while production factories and essential goods suppliers can remain operational, but must strictly comply with preventive measures.

In another development, the Nghe An Province government late last week decided to begin social distancing in the entire Vinh City after detecting some chains of infections.