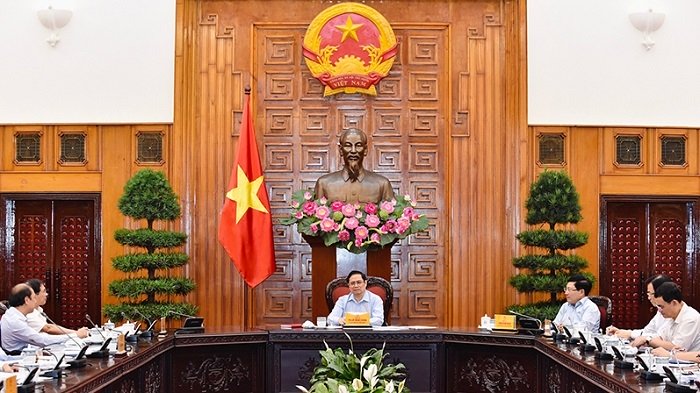 NDO - Prime Minister Pham Minh Chinh held a working session with the Ministry of Foreign Affairs June 19 on the implementation of the foreign policy as stated in the 13th Party Congress’s Resolution.

Speaking at the meeting, PM Chinh praised the diplomatic sector for promoting its proud tradition in successfully implementing the Party's foreign policy and always placing the country’s interests first and foremost.

He hailed that amid the complicated and unpredictable external environment in recent years, the Ministry of Foreign Affairs has played a timely and effective advisory role for the Party and State on foreign affairs, thus significantly contributing to the national construction and defence.

The Ministry has closely coordinated with the functional agencies operating in Party diplomacy, State diplomacy and people-to-people diplomacy to implement political diplomacy, economic diplomacy, cultural diplomacy, overseas Vietnamese work, and the protection of citizens in a comprehensive and creative manner, he added.

He asked the ministry to uphold its achievements and successfully implement the foreign policy of independence, self-reliance, peace, friendship, cooperation, development, multilateralisation and diversification while ensuring the highest national interests.

The Ministry should play a vanguard role in maintaining a peaceful and stable environment, make the most of external resources for national development, and raise the country’s position and prestige, he requested.

He also stressed the need to build a team of truly professional diplomats who are loyal, sharp, proactive and creative in conveying to the world the message that Vietnam is a trustworthy friend and partner, and an active and responsible member of the international community.