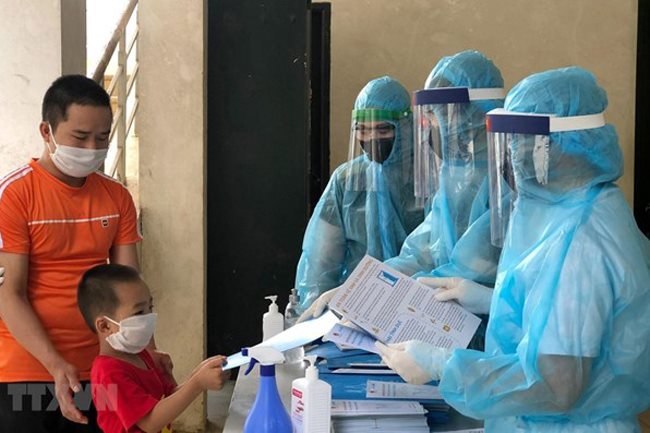 The Military Command of Hanoi’s Thach That District presents Covid-19 leaflets to people at the centralized quarantine center at the Vietnam National University -Hanoi. Vietnam has recorded another 176 Covid-19 patients this afternoon - PHOTO: VNA

HCMC – The Ministry of Health this afternoon, June 16, reported 176 new Covid-19 cases, with 174 of them locally infected in five localities and two imported into Tay Ninh Province.

Among the local cases, 128 were recorded in Bac Giang, 35 in HCMC, eight in Bac Ninh, two in Ha Tinh and one in Nghe An.

Six cases in HCMC were linked to the HCMC Hospital for Tropical Diseases infection cluster and 29 others came into close contact with earlier confirmed cases.

As for the case in Nghe An Province, who is a bank employee in Vinh City, the source of his infection remains unknown.

The Vinh City and Cua Dong general hospitals, which the man had visited, have stopped receiving outpatients. All employees of the two hospitals have also been tested.

Duong Dinh Chinh, director of the Nghe An Department of Health, said it had accelerated the tracing and testing of those in close contact with the man, the second Covid-19 case in Vinh.

On June 9, he came to the Vinh City General Hospital for a medical checkup. After making a health declaration, he entered the hospital as he neither showed Covid-19 symptoms nor visited pandemic-hit areas earlier.

Two days later, he visited the Cua Dong General Hospital and underwent a Covid-19 test. The result came back positive.

In related news, as a worker of a company in the Amata Industrial Park in Dong Nai Province tested positive for Covid-19, the municipal government today approved the Dong Nai Industrial Zones Authority’s proposal to ask three enterprises to arrange for their workers to stay at the factories after work.

These enterprises have a large number of employees each.

The arrangement of workers to stay at the factories must be agreed by the workers and the enterprises’ labor unions.

The province also asked these enterprises to coordinate with the healthcare sector to conduct Covid-19 tests for employees and only those with the negative result will be arranged to stay at the factories. The enterprises must pay for the testing costs.

Moreover, 61 direct contacts of the patient in the Amata Industrial Park have tested negative once.