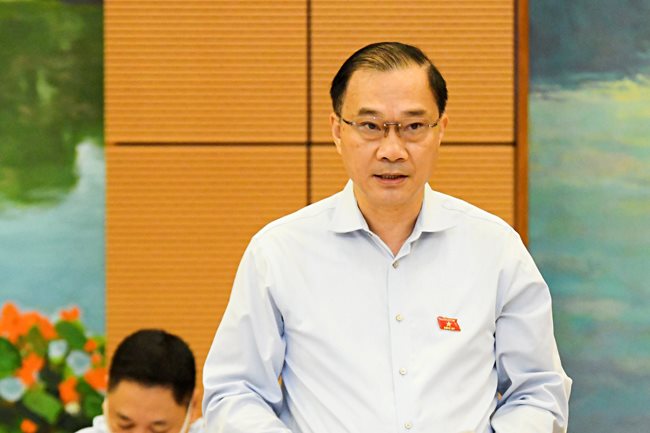 Head of the NA’s Economic Committee Vu Hong Thanh speaks at a meeting of the NA’s Standing Committee on June 15. Credit packages for pandemic-hit residents and enterprises have been disbursed slowly - PHOTO: TNO

HCMC – Credit packages for residents and enterprises that have been hit by the Covid-19 pandemic have been disbursed slowly and not as effectively as expected, according to the National Assembly’s (NA’s) Economic and Budget-Finance Committees.

A meeting of the NA’s Standing Committee on the implementation of socioeconomic development plans and the State budget collection and spending in the first half of the year as well as solutions for the remaining six months was held on June 15. At the meeting, head of the NA’s Economic Committee Vu Hong Thanh said as of May 27, some VND13.1 trillion or 36.5% out of a VND35.8-trillion package to provide cash for affected residents and enterprises had been disbursed.

As for another package worth VND16 trillion to help enterprises borrow loans from the Vietnam Bank for Social Policies to pay the salaries of employees, only VND41.8 billion or 0.26% has been given to 245 employers to pay nearly 11,300 employees, Thanh Nien Online newspaper reported.

Thanh said the packages had not helped many vulnerable and disadvantaged groups, especially laborers in the informal economic sector, workers, household businesses and small and micro enterprises.

In addition, the progress and results of solutions to eliminate the difficulties of Vietnam Airlines during the pandemic have yet to be reported.

Deputy head of the NA’s Finance and Budget Committee Dinh Van Nha agreed that the State budget spending toward the fight against Covid-19 was not as effective as expected.

Specifically, the Government failed to anticipate the impact of the pandemic on each region, so it was difficult to determine laborers without employment contracts losing their jobs, resulting in a small number of people receiving the support.

Therefore, the committee asked the Government to continue keeping a close watch on the situation to promptly amend polices or issue new ones to support local residents and firms.

To have a foundation for the policy amendment, the Government should report to the NA the distribution, management and use of the State budget for the fight against Covid-19 and support packages.

The Finance and Budget Committee also asked the Government to work out solutions with specific roadmaps to vaccinate residents against Covid-19.