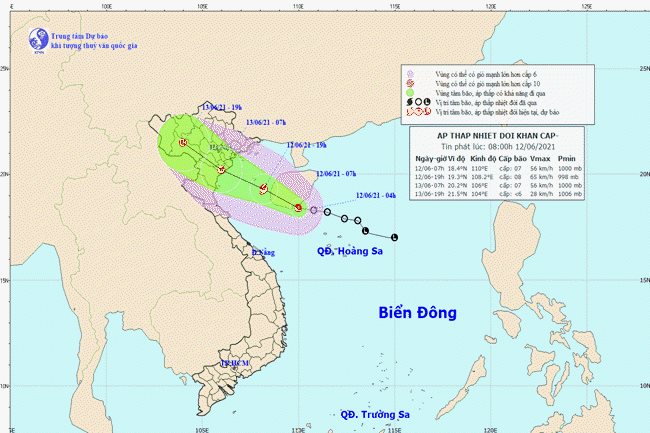 A map detailing the movement of the tropical depression - PHOTO: THE NATIONAL CENTER FOR HYDRO-METEOROLOGICAL FORECASTING

HCMC – A tropical depression active in the East Sea could move west-northwest at 15-20 kilometers per hour toward the Gulf of Tonkin and strengthen into a storm in the next 12 hours, packing strong winds at level eight, gusting to level 10, according to the national weather center.

In the following 12 to 24 hours, the storm is likely to maintain its west-northwest direction at a speed of 15-20 kilometers per hour, make landfall and impact the northeastern and north-central localities before weakening into a tropical depression.

As of 7 a.m. on June 13, the tropical depression could be spotted in the Northern Delta and the north-central province of Thanh Hoa, packing strong winds at level 9.

In the next 24-36 hours, the tropical depression will continue to move west-northwest at around 15 kilometers per hour to deeply enter the mainland before weakening into a low-pressure area.

Due to the unfavorable weather conditions, the Gulf of Tonkin this afternoon could experience strong winds blowing at level 6-7. Also, from today to June 14, the northern region and localities running from Thanh Hoa to Thua Thien-Hue may see medium to heavy rains, along with thunderstorms, lighting and gusty winds.