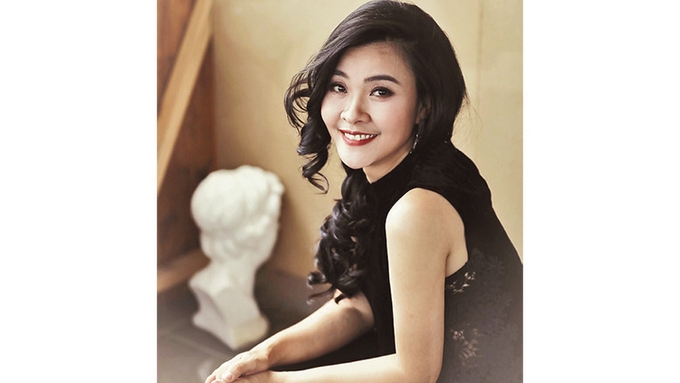 She said the opera stage for children is a space that has challenged artists’ creativity and she wants to embark on that journey.

Q: Congratulations on your second opera production entitled “The Swans” which will surely be an attractive play for children during the summer holidays. Why did you choose this work?

A: “The Swans” is a fairy tale imbued with human culture, evoking rich imagination amongst audiences and highlighting lessons suitable for children. It is the love and sacrifice of the beautiful princess Lisa for her brothers and family. This is also a story that brings many opportunities for the expression of many art forms such as acting, modern dance, ballet and singing, creating a fairy forest imbued with mythology. Young audiences will not only immerse themselves in the fairy tale and meet their favorite characters but also share the happiness and sadness of Princess Lisa and her brothers. Thanks to the situations in the story, children can distinguish the good and bad and love their families more.

Q: This is a familiar work for children, so how did you renew "The Swans"?

A: A team of talented people, especially the outstanding actors and actresses such as Ngo Le Quyen, Quang Trong, Pham Trung Thach and Thu Nga, had accompanied me since the idea was raised. This version of “The Swans” is not exactly the same as the original. In the form of opera and as a combination between myth and reality, children can feel a story that seems old but brings a new perspective in the arts and features many significant lessons. I bravely put new and modern things into my work. For example, in addition to contemporary songs such as pop and rap, I brought classical music from the Tchaikovsky’s ballet “Swan Lake” into the segment “Swans on the stream bank” and made variations from classical music to rock to refresh the song “Doi ken ti hon” (Tiny trumpet team) by musician Phan Huynh Dieu by mixing in a jazz style. I also used body language through contemporary dance to highlight the characters' personalities and stories. I hope that these creations will bring the play closer to the children.

Q: What difficulties did you face following yout experiences with two other recent plays?

A: Opera, especially those for children, is inherently a difficult art that requires artists to collect general knowledge from many art forms. The creative team and cast of “The Swans” are mostly artists from the Tuoi Tre (Youth) Theatre. We have a lot of experience in staging and performing plays for children. However, we faced numerous difficulties in many aspects such as human and material resources. The challenge for me and my crew was how to satisfy young audiences. I hoped they would experience many emotions - laugh, cry and realise that good things should be cherished, and bad things should be avoided. In particular, the children can understand the characters’ lives on stage. I focus on investing in a combination of top art forms such as ballet, contemporary dance and classical music to improve the artistic quality and artistic aesthetic for the audiences. Opera is still quite new to children, but through the two plays, I found that my audiences have shown a positive response. Many audiences have watched several times. That was our truly a joyful feeling.

Q: Up until now, we have assumed that opera has been picky about its audience. However, tickets to your “Yellow Flower Camp” have continuously sold out. In your opinion, why was it successful?

A: “Yellow Flower Camp” has succeeded beyond our expectations. This is a play mixed with a musical party, which brings the play closer to the audience. The stories by writer Nguyen Nhat Anh and the favourite songs were also the factors that have led to the play’s success and I was the one who put them side by side in harmony and in the right position. Through the concerts, I received a lot of messages from the audiences. They also posted their compliments and comments on the play’s flaws on their personal pages and timelines. The path bringing opera closer to young audiences is still wide, and I believe that we have touched the hearts of the audiences. A scene in the play "The Swans"

Aspiration to make stage a part of childhood memories

Q: Obviously, the stage for children is a void and opera is not popular with children and teenagers. It is also a field that contains challenges both in terms of human resources and audiences. What motivated you to embark on this difficult path?

A: Actually, the stage in the Youth Theatre has rarely been "empty". The theatre organizes hundreds of performances and welcomes thousands of child audiences every year. Realising that it is necessary to innovate and improve the quality of plays to serve young audiences, the theatre has faced new challenges that are considered opportunities for artists to create and promote their strengths. I chose opera to promote my strengths and those of the artists in the theatre. However, many challenges lie ahead of us. An opera director or an actor needs to have an overall knowledge of many art genres including drama, vocals and dance. Currently, there are no schools or universities specialising in opera, so there are almost no human resources for this art form.

Fortunately, the Youth Theatre has two art troupes of drama and music-dance, so artists are used to the fact that singers and dancers can act, while actors and actresses can dance and sing. We have musicians with extensive experience in composing music for plays, especially for children's plays, such as Tuan Nghia, Luu Thien Huong, Tuong Van and Hai Nam. However, to meet the requirements of classical music, we still have to invest and practice a lot. When staging operas, I also worry about how the audiences will accept the plays as this is an art form that is strange and most people think that it is difficult to watch and understand because of its academic nature, especially young audiences. We also experienced failures when trying to make operas a few years ago. However, with our belief and aspiration to bring new plays with great artistic quality to young audiences, we were not afraid to embark on this difficult and challenging path.

Q: From being a singer, you pursued the career of a director and gained successes with your first play “Yellow Flower Camp”. It seems that you are suitable for "teenagers and children"?

A: I have never forgotten that I am a singer and music has always fulfilled me. I will bring my love into the plays for children and young audiences. My colleagues and I are still pursuing a path of artistic creativity and labour for teenagers and children. With a great love for the youth, I want my career to be associated with them. I think it is crucial to focus on children so that opera will no longer feel strange for audiences. I still hope that the Youth Theatre’s stage will be a part of the children’s beautiful childhood memories.