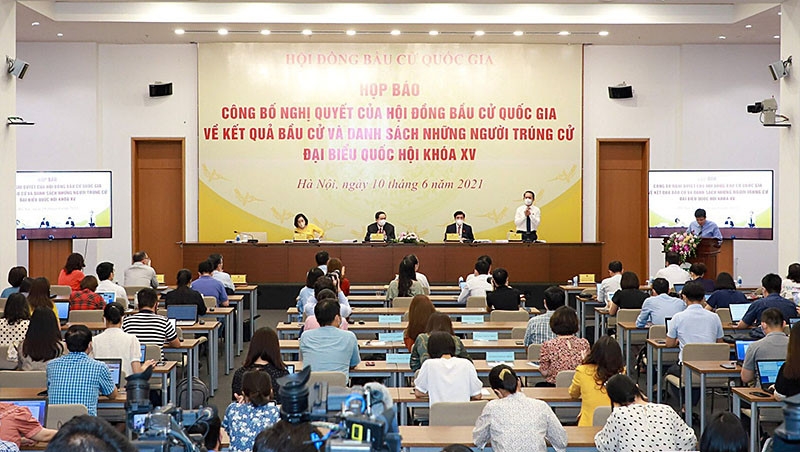 At the press conference in Hanoi. (Photo: DUY LINH/NDO)

NDO/VNA - The National Election Council (NEC) held a press conference in Hanoi on June 10 to announce its Resolution on the outcomes of the elections of deputies to the 15th National Assembly and People's Councils at all levels for the 2021-2025 tenure along with the list of 499 candidates elected to the 15th legislature.

The success of the elections demonstrates the collective power of the people and the entire political system under the Party's leadership and State management, and vividly reflects the tradition of patriotism, the power of the great national unity and the people's solid trust in the regime, the Party and State, he stated.

Chief of the NEC Office Bui Van Cuong said voters nationwide elected enough 500 deputies to the 14th NA. However, after considering eligibility of winners in line with the law, the NEC decided to not confirm the eligibility of one elected candidate in Binh Duong province.

According to Cuong, the rate of full-time NA deputies in this term has reached a record high of 38.6 percent of the total number of lawmakers. The rates of young, ethnic and re-elected deputies also met or surpassed the targets. In particular, the rate of female deputies has reached an all-time high of over 30 percent since the sixth NA tenure.